The last Passing of the Pioneers for 2014 includes some characters from the early days of Portland, a wealthy grazier and a Swiss born gold-seeker who settled at Heywood.

William CHARTER: Died December 1888 at Portland. “The relentless reaper death has sought another addition to his uninterrupted harvest from amongst the ranks of our oldest residents.” And so began the obituary of William Charter, a Portland resident from the 1850s and one time Portland police sergeant.  He did have some time away from Portland when he operated the Rising Sun Hotel at Hotspur.

William returned to Portland and operated a cordial and soda water factory.

Walter LAIDLAW: Died December 1906 at Apsley. Walter Laidlaw was born in Scotland around 1825. He arrived in Victoria in 1850 and with the discovery of gold, he tried his luck on the Bendigo diggings. He then farmed at Broadmeadows before moving to the Western District, farming on the land that became known as Skene at Strathkellar.  He was then appointed overseer of Newland Station at Apsley for James Gordon and in time, married his employer’s sister.  At the time of his death, he owned Ardachy Estate and Melville Forest Estate. 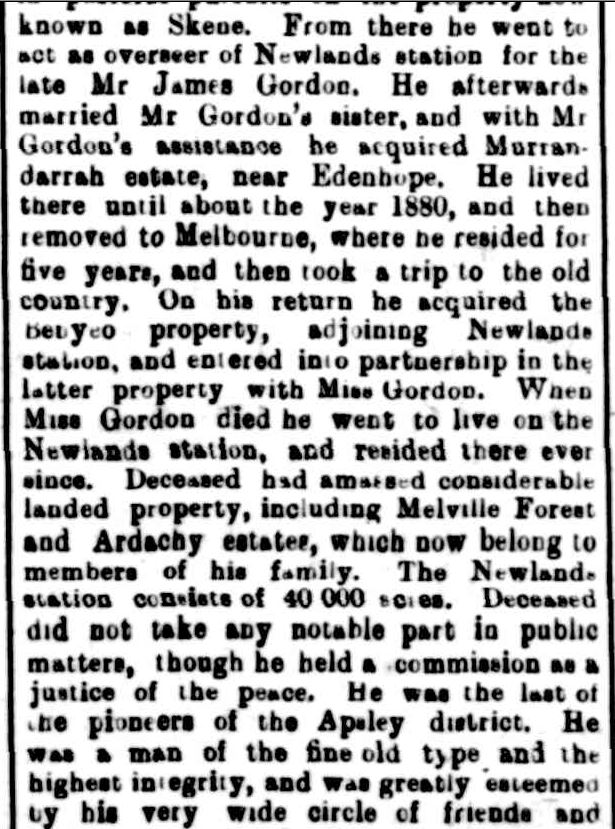 Around the time of his marriage, Walter purchased Mundarra (below) near Edenhope. 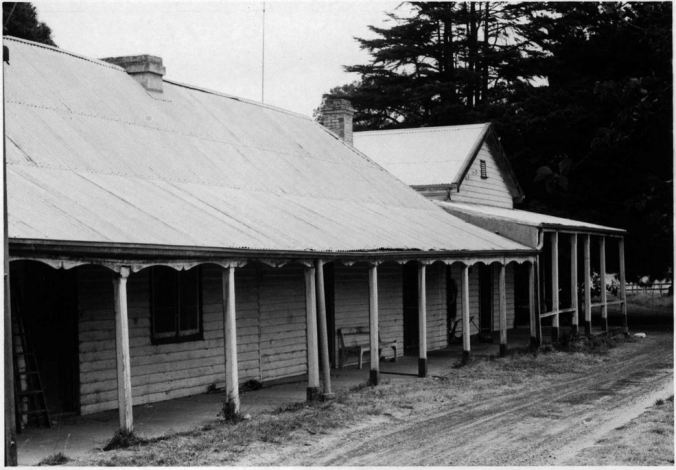 He was buried at the Newland Station Cemetery with other members of his family.

Theobald FETHERSTONHAUGH: Died 24 December 1909 at Hamilton. Theobald Fetherstonhaugh was the son of Cuthbert Fetherstonhaugh snr an early police magistrate at Hamilton and brother of Cuthbert jnr, the author of “After Many Days” which I have previously posted about.  Cuthbert snr resided at Corragh at Strathkellar and Theobald continued to live there after his father’s death.  Unlike his brother Cuthbert, Theobald seems to have lived a quiet life at Corragh.  While Cuthbert mentions “my brother” many times throughout “After Many Days”, he does not name Theobald as he does his other brother Robert.  Theobald was buried at the Old Hamilton Cemetery with a headstone (below) that gives nothing away about his life.

Mary RYAN: Died 11 December 1914 at Hamilton. When Mary Ryan passed away in 1914, the names of her parents were not recorded and it’s unlikely she left anyone behind to pass that information on or even to remember her, so let us remember Mary Ryan of Hamilton.

Mary Ryan ran a registry office for servants in Hamilton for many years, first in Gray Street and later in Brown Street.

Determined to stay independent in old age despite becoming very decrepit, she remained in her home.  Early in the year of her passing, Mary had a fire in her house, the third time she had endured a house fire, herself suffering burns on one occasion.  She wasn’t injured in the 1914 fire, but it may have taken some toll as she passed away eight months later.

After checking the headstones of the Old Hamilton Cemetery recorded by Cemeteries of the South-West, there was no record of Mary, so if she was buried there, her grave is without a headstone.

William Gordon JENKINS: Died 28 December 1916 at Hawkesdale. William Jenkins was born in Scotland, a son of a Church of England clergyman. On arrival in Victoria, he worked at flour mills around Hamilton, then went to New Zealand with a survey party. He returned to Victoria and worked in the sawmilling industry. In 1883, he married widow, Jane Walshe (nee Donnelly).  At the time, Jane was operating the Forester Hotel at Myamyn.   After their marriage, William and Jane moved to Portland and operated the Victoria Hotel from 1884 until 1886. William had no family of his own but was living with his step-daughter at the time of his death.

Charles FARR: Died 15 December 1917 at Portland. Born in Wiltshire, England around 1833, Charles Farr, an interesting character, was the proprietor of livery stables in Portland having arrived in the mid-1850s.

Although his obituary stated Charles Farr did not involve himself in public affairs, he was often in the public eye especially in the papers, whether advertising his stables or involved in some type of dispute. His following “Letter to the Editor” was either damage control or cashing-in on another stable’s misfortune. Charles’ letter was in response to an article in the Portland Guardian of 10 June 1880. 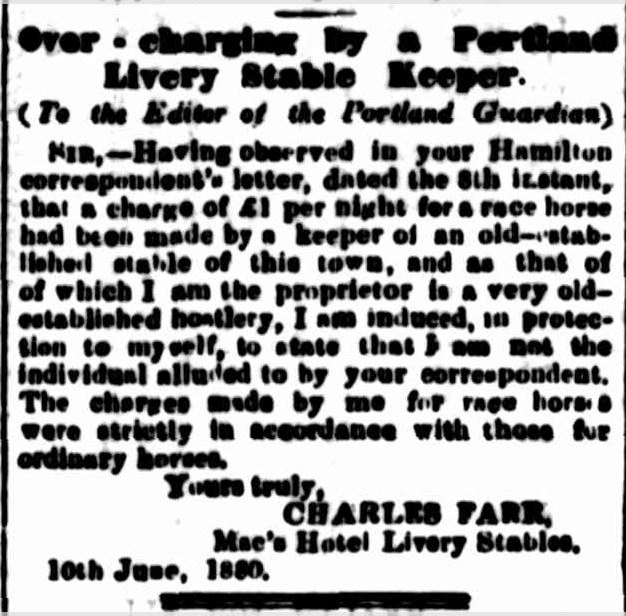 Serafino RIGHETTI:  Died 21 December 1917 at Heywood. I first “met” the Righettis of Heywood when I wrote the Trove Tuesday post “Accidental Tourist”. I didn’t realise then that the family was one of the Swiss/Italian families that settled at Hepburn near Daylesford after arriving in Victoria during the 1850s. Serafino was born in Switzerland and arrived in Melbourne in 1854. His brother Battista arrived the following year. A photo of Serafino and Battista appears on the following link – http://tinyurl.com/l4o5k5n

After time operating the American Hotel at Hepburn, Serafino moved to the Heywood district in the late 1870s establishing the merchant business Righetti & Co. He was a shire councillor for twenty years and served as Shire President several times.

An interview with Serafino’s grandson Alan Righetti, with details of the family’s early days, is on the following link –  http://www.3squadron.org.au/subpages/AAWRighetti.htm

Eliza Sarah SEABORNE: Died 9 December 1932 at Portland. Eliza Seaborne was born in Adelaide in 1838 and arrived in Portland with her parent three years later. In 1856 aged eighteen, Eliza married bootmaker James Mallett in the first wedding conducted at St. Stephen’s Church at Portland.  They settled at Merino around 1866 and James ran a bootmaking business in the town.  He died in 1901 and Eliza continued to live at Merino until around 1928 when she moved back to Portland to live with her daughter Mrs Martha Sutchbery.

In May 1931, Eliza celebrated her 93rd birthday and she spent the day with family and friends.

Eliza was ninety-four years and seven months old when she passed away in 1932. She left three daughters and three sons with four children having predeceased her. Eliza was buried at the Merino Cemetery. More information about the Mallett family is available on the South-West Pioneers site – http://www.swvic.org/merino/mallett.htm