If you find yourself travelling along Victoria’s south-west coast, don’t miss the Port Fairy Cemetery. 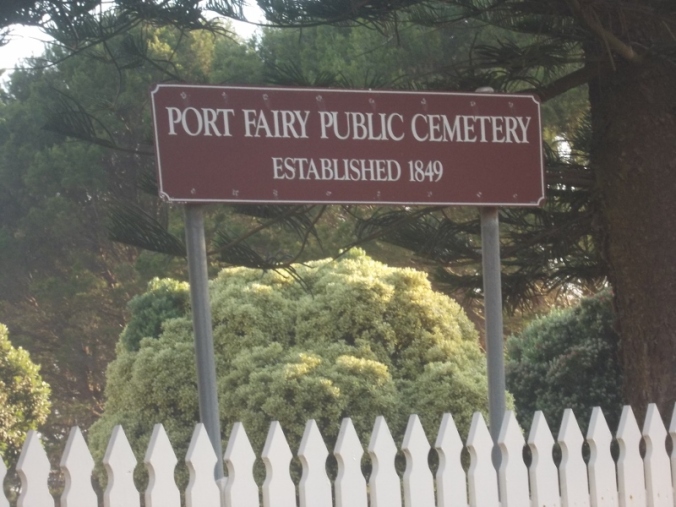 Last summer, I revisited the cemetery with the aim of photographing as many headstones as possible.  During our four days in Port Fairy, the weather was hot and our days were spent at the beach.  My only chance was to head off early to beat the heat.   I took the dogs, and after a stop at the beach for a run, them not me, we arrived at the cemetery around 7.30am.

Taking photos and holding two dogs on leads, is not an easy task.  I’m glad they didn’t see the rabbits sitting among the graves but I didn’t count on the burrs.  Soon the dogs were stopping periodically to pick burrs from their paws.  I didn’t get as many photos as I would have liked but I have captured some of the older and more interesting headstones.  I will post the photos in two parts.

On one of my past visits to the Port Fairy Cemetery, I joined a tour run by the Port Fairy Genealogical Society.  It was fantastic and I wished I had our knowledgeable guide Maria Cameron on this visit as I tried to remember the stories behind the graves.

Sealer and whaler, Charles Mills and his older brother John, first saw Port Fairy in 1826, eight years before the Henty brothers arrived at Portland.  However, their whaling camps were not considered permanent in comparison to the Henty settlement, thus the Hentys take the title of first European settlers in Victoria in most discussions on the topic.  Launceston born Charles Mills passed away in 1855 aged 43 and John in 1877 aged 66.   The biography of the brothers is on this link – John and Charles Mills

This was the home of John Mills in Gipps Street, Port Fairy just across the road from the port where he was harbour master. 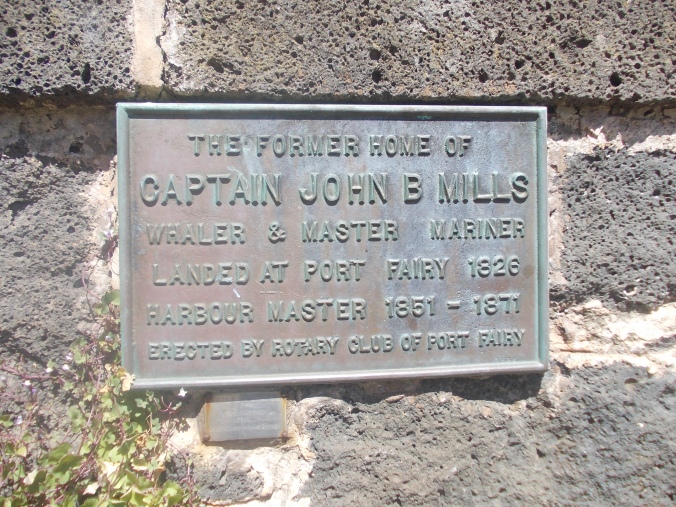 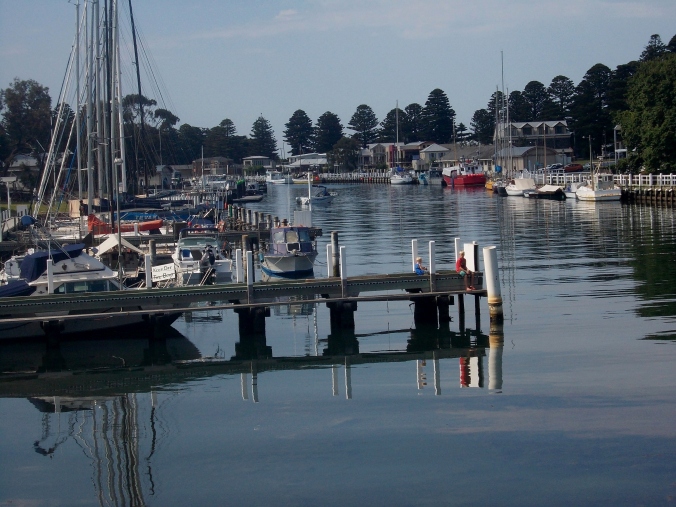 An obituary for John Mills was published on 28 September 1877  in the Portland Guardian:

The Portland Guardian published an interesting article about the Mills Brothers on 21 September 1933.  It included their life stories and that of their father Peter Mills who served as secretary to Governor Bligh  – Early Settlers 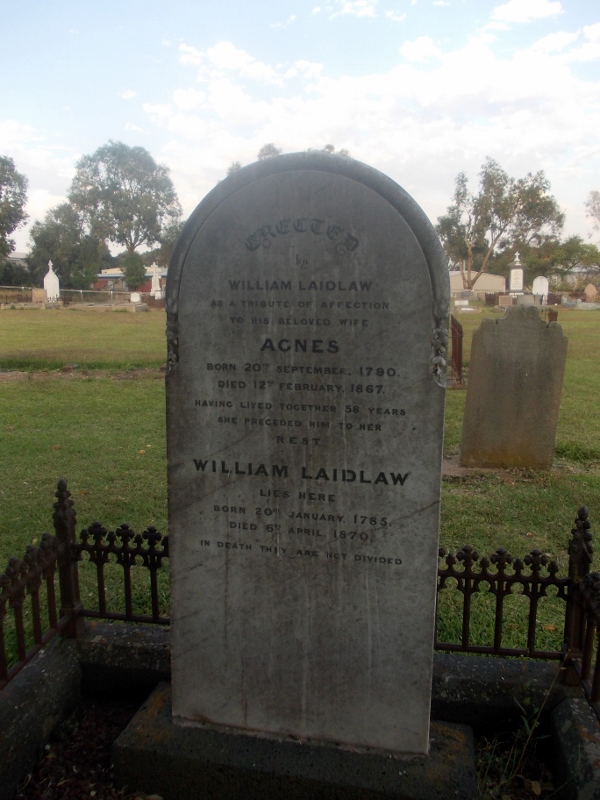 HEADSTONE OF WILLIAM AND AGNES LAIDLAW

At least two of their children had great success.  David Laidlaw went on to serve five times as Mayor of Hamilton and was also a leading businessman in that town.   Robert became well-known in the Heidelberg area as a landowner and sheep breeder.  The following is a family photograph taken at Robert’s 90th birthday.  Robert is at the front with the white beard and brother David to his right. 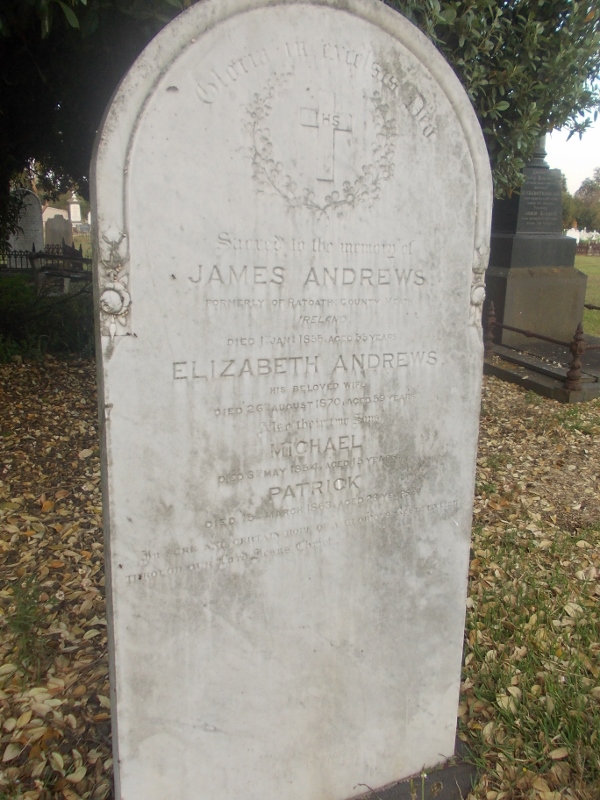 HEADSTONE OF JAMES AND ELIZABETH ANDREWS AND THEIR SONS MICHAEL AND PATRICK.

The headstone is difficult to read from the photo, so I have transcribed it:

Sacred to the Memory of

There was little information around about the Andrews family but I thought I would check shipping records.  An Andrews family arrived at Portland during October 1853 aboard the Oithona.  They were from Meath, Ireland, matching the headstone.  The family consisted of James, aged 56, Elizabeth aged 45, Patrick aged 12, Fanny aged 10, James aged nine and Therese aged 2.  On arrival James Sr. and the family went on to Port Fairy of their own account.  If this is the same Andrews family, James was in Victoria only two years before he died.

Instead, I got the following photo showing John and Elizabeth Goldie epitaphs.

If I had a photo of the reserve side, you would also see three babies. It was their the lives cut short:

John Goldie and Elizabeth Clarke arrived in Melbourne aboard the Greyhound in 1862.  With them were their children, Elizabeth aged 11, James aged 2 and Margaret aged 1.  John was born in 1862 at Port Fairy and Margaret barely survived the voyage, dying in 1862.

John Goldie Sr. was a pioneer of the agricultural industry, working with the Agricultural Department planting experimental crops.  Photos of one of his experimental sugar beet crops are below. 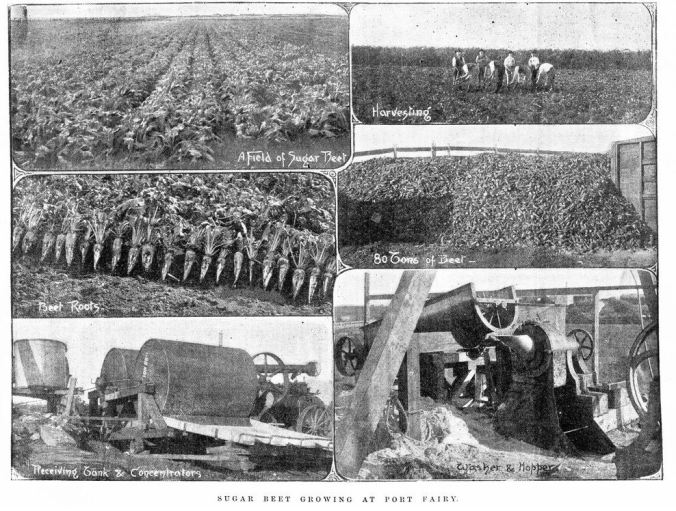 John died in 1901 after a cow knocked him down.  Elizabeth had passed away 29 years earlier aged 45.

Son of John and Elizabeth, James Goldie. who was two when he arrived at Port Fairy. was a previous Passing Pioneer – James Goldie obituary

The grave of William Kerby goes back to the early years of the cemetery.  William was buried in 1847 in a grave with headstone and footstone arranged by his wife Mary. 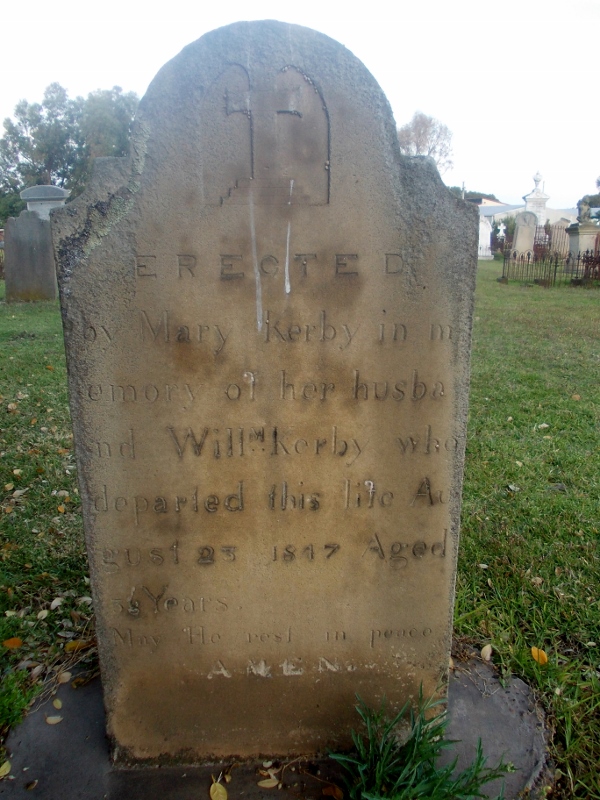 Look a little closer at the next headstone and a sad story begins to emerge.  A check of the marriage record of Robert and Annie Grosert sees the story turn sadder still.  Robert Grosert, the son of a Port Fairy butcher and himself in the trade was born in 1852.  He married Irish immigrant Annie Greer in 1877.  By 14 November of that year Robert was dead and by 4 December, so was Annie. 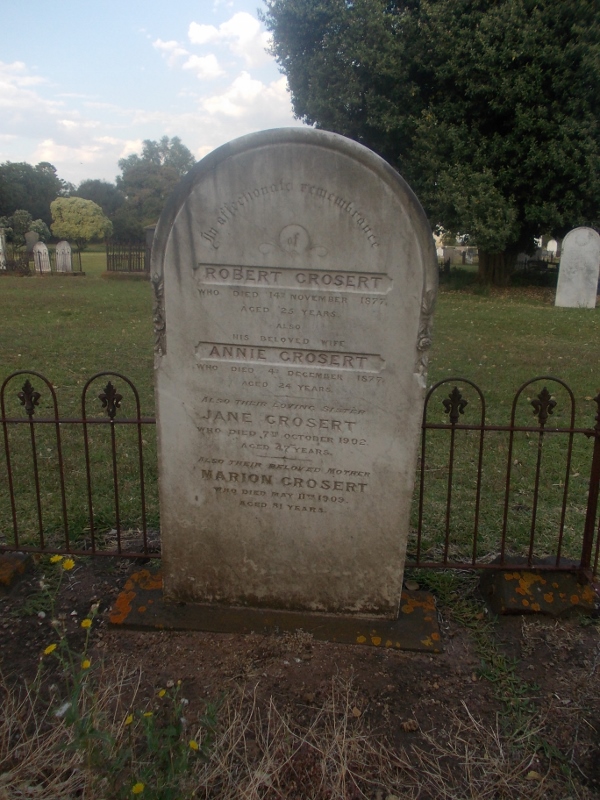 George Best was born in Port Fairy in 1853, a son of  George Best and Lucy Weston.  He married Emilie Melina Jenkins in 1877 at Wagga Wagga, NSW and they settled at Port Fairy.  George enjoyed sailing and it was while competing in a regatta on the Moyne River at Port Fairy in March 1891, he was knocked overboard and drowned. 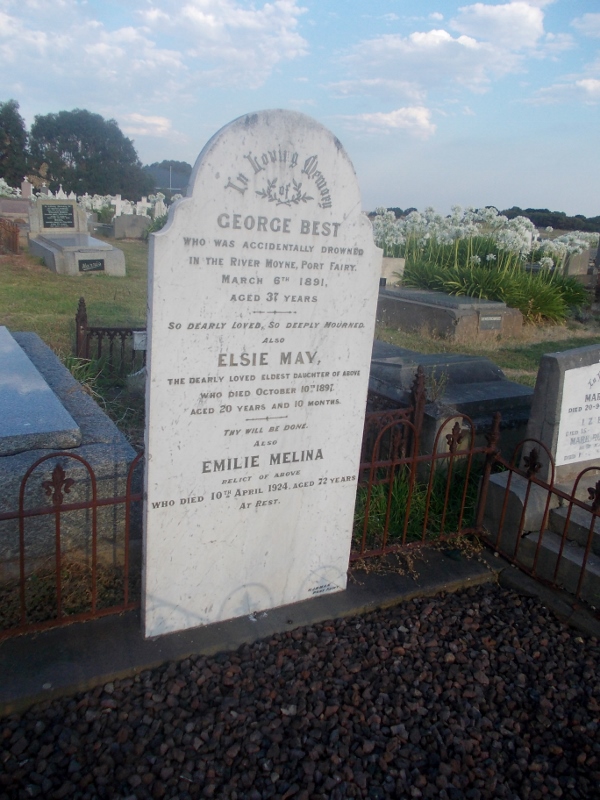 A diver recovered George’s body from the river floor.  A team of townspeople worked on George for two hours trying to revive him.  An account of the drowning appeared in the Portland Guardian on 13 March 1891 and described the incident and the preparations of the diver which makes interesting reading.

An inquest was held into the accident.

George and Emilie’s daughter, Elsie May Best was buried with her parents.  She died on 10 October 1897 at Port Fairy aged 20 years and 10 months.

When you walk through a country cemetery and see dozens of unfamiliar names, then later research those names, it’s amazing what you can dig up, so to speak.  Francis Alexander Corbett is one such name. Francis born in 1818, was buried in the Port Fairy cemetery with his wife Ellen Louisa Lane.

After searching Trove newspapers, I discovered that Francis arrived in Australia in search of gold and after some time on the diggings went to Melbourne and worked as a reporter for the Argus. Not fond of the work, he moved to the Census Commission conducting the 1854, 1857 and 1861 census as Census Secretary.  He was also a life member of the Royal Society of Victoria. 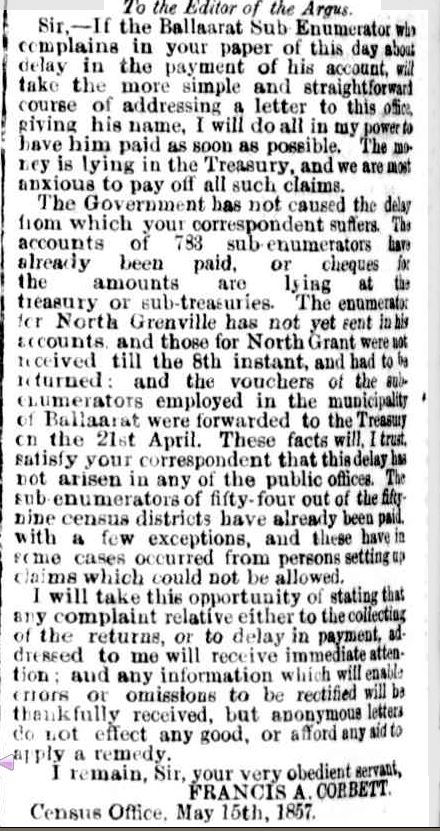 In 1857 he wrote a book Railway Economy in Victoria and in the same year married Ellen Louise Lane born c1829.  During the 1860s, Francis and Ellen moved to Port Fairy and Francis managed the estate of James Atkinson.  They later moved to Kirkstall near Warrnambool.  In 1889, the following article appeared about Francis Corbett in the Australian Town and Country Journal: 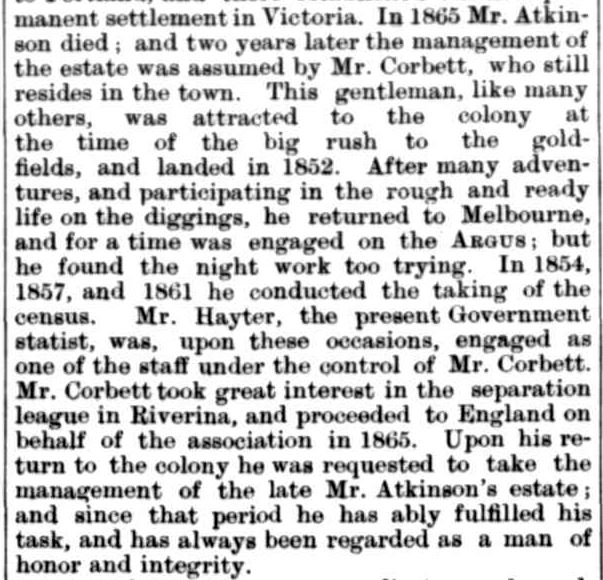 Francis was visiting Port Fairy when he died suddenly at the Commercial Hotel (now Royal Oak Hotel) on 10 June 1893. 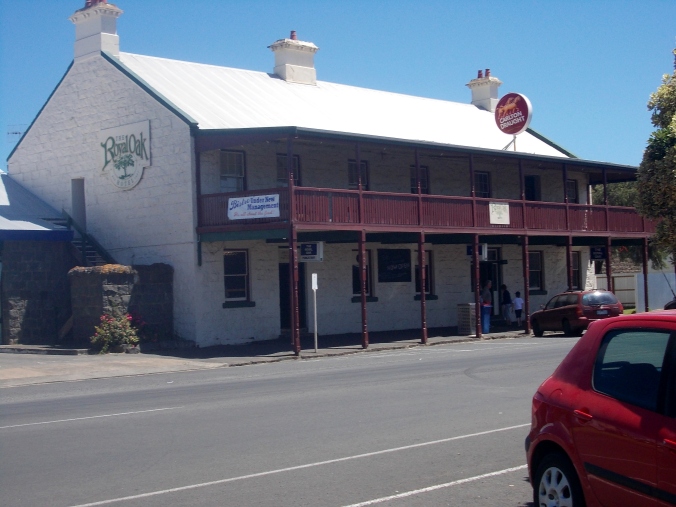 An obituary appeared in the Argus:

The information contained in Francis’ will was even more enlightening especially that about his brother John Corbett. 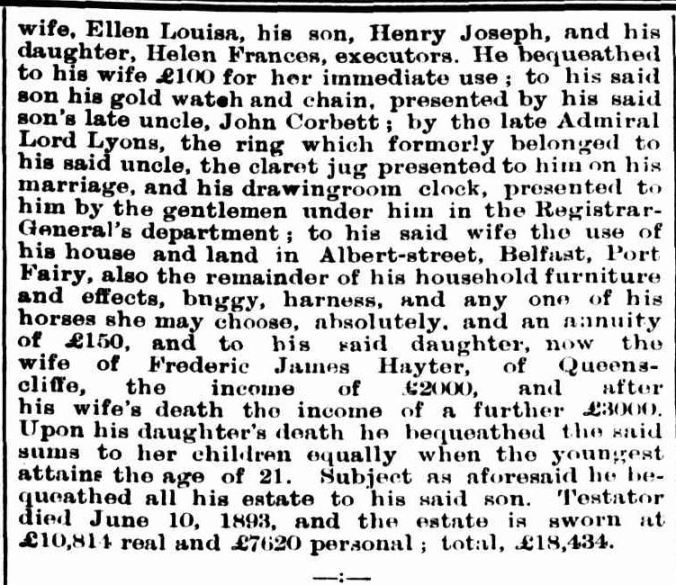 I tracked down John Corbett or rather,  Admiral Sir John Corbett born 1822 and died 1893, five months after Francis.

Five members of the Finn family lie in the following grave.  The first to pass was John Finn in 1879.  John was the owner of the Belfast Brewery and from 1852, the Belfast Inn in Regent Street, Port Fairy. He was also one of the trustees of the old cemetery which possibly refers to the Sandhills Cemetery although the Port Fairy cemetery website says. at times both cemeteries were referred to as the “old cemetery.” 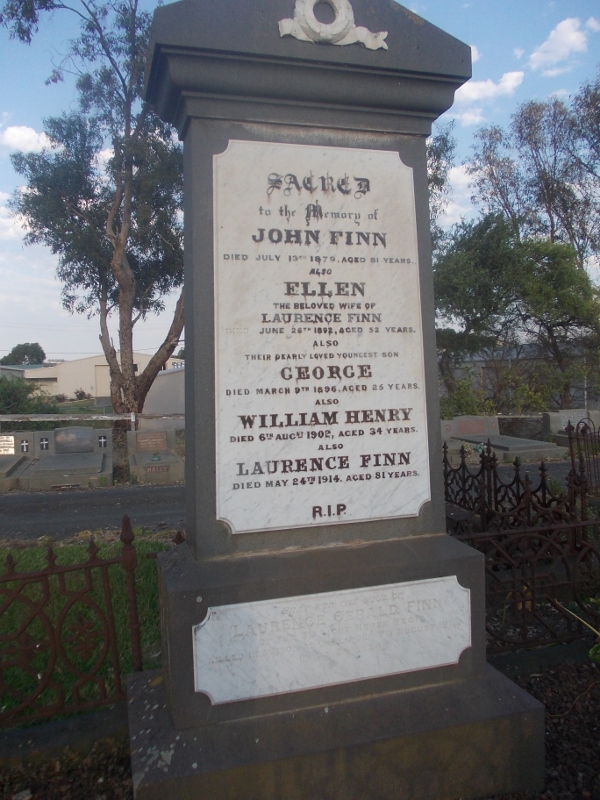 The next death in the Finn family was John’s daughter-in-law Ellen, wife of Laurence Finn.  In 1896, Laurence and Ellen’s youngest son, George passed away aged 25.

Another son, William Henry passed away in 1902.  That left just Laurence who died on 24 May 1914, aged 81 years.  His obituary appeared in the May 2013 Passing of the Pioneers.  Laurence died a wealthy man having inherited land from his father, however his will was contested.  A hearing in 1916 saw many witnesses called to assess the soundness of Laurence’s mind when his will was drawn up.  The article is available on the following link – http://nla.gov.au/nla.news-article88008165

Just a handful of graves, yet so many interesting characters and stories.

For more information about the Port Fairy Cemetery, check out the website –  Port Fairy Public Cemetery.   Also, ABC Local Radio did a great story on the cemetery including an interview with Maria Cameron and you too can listen to Maria talk passionately about the cemetery.  There are also photos accompanying the story which are so much better than mine.  It is available on the following link  – Radio Interview.  The Find A Grave entry for Port Fairy has had some great work done on it with hundreds of headstones photographed.