While writing the history of the Harmans of Byaduk, I immersed myself in the family’s daily lives and at times felt as though I was there with them.  With my ggg grandfather James Harman, I was among the congregation at the Byaduk Methodist Church and traversed the countryside as he conducted his Local Preacher duties. I attended sheep and Pastoral and Agriculture (P&A) shows and learnt the finer points of tilling the soil at ploughing matches.  I  felt James’ pride in 1907 as he stood with his fellow pioneers and friends for a photograph before his beloved Byaduk Methodist Church (below) and shared his satisfaction when he won a Lincoln ram at the Hamilton P&A show.

The post False Alarm, revealed my ongoing frustration of not having an obituary written about James Harman, my favourite ancestor. One such as those written for his brothers Jonathan and Walt, lengthy, information-packed tributes which told me much about the type of men they were.  An obituary for James in the Hamilton Spectator came close but I wanted more.

Just a few weeks before my thesis was due, the Spectator and Methodist Chronicle (Melbourne 1914-1918) came online at Trove and there was an obituary for James. Unfortunately, the article was still undergoing quality control checks so the wait was on.  My “Electronic Friend” would send an email when the article was ready to go but no amount of checking my inbox made the article arrive.  The submission date for my thesis came and went and still, the article was unavailable.  Until yesterday.

The obituary was signed “W.H.G” and knowing something of the Byaduk Methodist Church helped me name the author as the Reverend William Herbert Guard who presided over the church at the time of James’ death.  His tribute answered one of my questions about James.  When did he become involved with the Wesleyan Methodist Church?  Was it when he arrived in Port Fairy in 1852?  Or when the family spent some time at Muddy Creek before going to Byaduk.  Muddy Creek had a strong Methodist community of Wesleyans, Primitives and Reformers who had arrived via Port Fairy.  But, according to Reverend Guard, James’ commitment to Methodism began before leaving Cambridgeshire.

Reverend Guard visited James in his last days and recounted those visits but most powerful were his recollections of James’ final hours. “I’m going home,” a weakening James told him. Then in his last moments, James raised his hand and uttered his last word “Coming” and with that, he was gone. James was ready to meet his God. Many obituaries describe the last moments of a person’s life but often in a clinical fashion. W.H.G.’s description was spiritual.  Such was James’ devotion it couldn’t be any other way.

James was not just “going home” to God. His beliefs gave him the faith to believe he was also joining his wife Susan Reed.  The obituary confirmed the bond he shared with Susan, forged over sixty-four years.  Susan died on 10 April 1916 and James on 13 August in the same year.  I have always thought the few months apart was too long a time for James. He had lost the woman who gave him strength and after only four months they were reunited at the Byaduk Cemetery.

There is little information about Susan’s life besides her birth, death and children in-between.  But she was with James when they left Melbourn, Cambridgeshire as newlyweds and endured a forgettable voyage on the Duke of Richmond.  She travelled with him from the port of Portland to Port Fairy for James’ first employment in Victoria and together they endured the pioneering life at Byaduk.  No doubt she sat up late into the night waiting for James to return from church meetings and sheep shows in neighbouring towns.

Reverend Guard brought to my attention something about Susan I did not know and it was sad to read of her blindness in her last years.  That is now obvious when I look at her in this treasured photo passed on to me by James and Susan’s great-grandson Mike Harman.

On reaching the end of Reverend Guard’s tribute, chills had come over me and tears filled my eyes.  Since that first reading, I have thought often of those last hours of James’ life with sadness. After feeling many emotions while researching James’ life, for the first time, I was feeling grief.  It is the only time I have felt that emotion about my long departed ancestors.  Usually, such discoveries evoke feelings of jubilation such as the revelation my ggg Grandmother Ellen Barry died in a house fire caused by her insobriety or learning my gg aunt Ellen Harman dropped dead on the floor while cooking breakfast for her son.  While I did feel sad for their unfortunate passing, always in the back of my mind was the thought “That will be good for the family history”.  But the tears that came to my eyes when reading about James weren’t because this useful information missed my thesis, it was because I felt like I was saying goodbye.

Snapping back to reality, I reminded myself the never-ending journey of family history will bring new stories of James and I can once again join him on his life’s adventures. 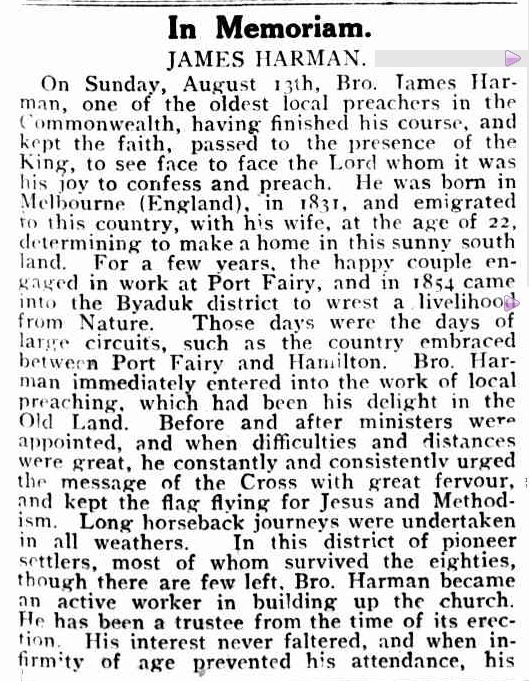 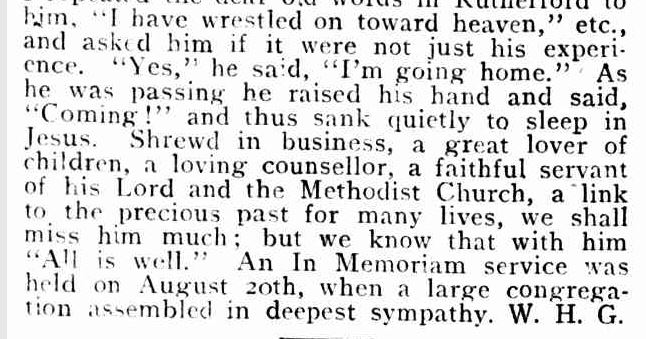 4 thoughts on “Called by God”