A week ago, Karen Annett of the Annett Family Australia Facebook group, posted on another group, Victorian Genealogy, about a missing family member, Frances Annett (born 1840, Seven Oaks, Kent).  As a member of the Annett Family group, I had previously read about the search for Frances, one of those elusive women we often come across in our family trees.  Frances had arrived with her parents William and Mary and siblings to Portland in 1853 and that is the last record of Frances’ being.  In reply to Karen, I posted a message of support that she shouldn’t give up hope of finding Frances, giving her a brief summary of my search for Mary Ann Harman.

For my 300th Western District Families post, this is the extended version of  the story of Mary Ann Harman who I thought was…

Mary Ann Harman has always been a mystery.  I have accounted for all the first generation Harmans of Byaduk, their births, death and marriages.  Except for Mary Ann, the daughter of Jonathan Harman and Mary Oliver.

Born in 1869, the sixth child of Jonathon and Mary, Mary Ann drops off the radar after birth.  I’ve checked and double checked her birth record and yes she was definitely born.  Over the 20 years I’ve researched the Harmans, I reached the conclusion she had died as an infant.  Not that unlikely since her younger siblings Joseph and Sarah died during the 1870s, Joseph as a baby and Sarah aged six.

My pursuit of Mary Ann has not been a desperate one because. as she was a child of my ggg uncle, I thought I could live with the fact she was missing.  However, because I’m writing a Harman family history I considered I would have to get some of the records I have refrained from getting before.  Recently I received a copy of Jonathan Harman’s will from PROV via Archival Access, and the mystery deepened because there in black and white was the name of Mary Ann.  At the time of his death in 1930, Jonathan had four daughters, besides Mary Ann, and two sons,  Arthur a farmer from Byaduk and Jonathan, a man I considered  the black sheep of the family.  No surprise to me, he was not named in his father’s will.

Jonathan snr. left his ready money and money in the bank to all his daughters, with a proviso that it did not include Mary-Ann.  He bequeathed the net profit of one of his properties to his daughters…except Mary Ann.  Arthur was to receive the balance of Jonathan’s estate “but subject to and charged with the payment by him of the annuity of twenty pounds to my daughter Mary Ann during her life…”.

So Mary Ann wasn’t dead, rather 61 years of age in 1930, but why was she treated differently to her sisters and Arthur?  Was she untrustworthy or did her father think she was not worthy of a share of his property?  Why did was left an annuity instead?  Was she not capable of supporting herself?  The discovery in Jonathan’s will certainly raised more questions than it answered.

But it meant I could begin searching for her again with renewed confidence.  I went straight to the Victorian Death records and searched for “Mary Ann Harman” (assuming she never married) and found the closest match – Mary Ann Harman born about 1873, died Ararat 1948, parents unknown.  If  that is my Mary Ann,  the fact she died in Ararat possibly answers some of my questions.  The reason being there was a lunatic asylum in Ararat (Aradale).

A search of Trove only found a Law Notice from 1951 declaring the said Mary Ann Harman intestate, however it confirms to me that the Mary Ann who died in Ararat was a spinster.

Now I have some new leads.  I’ll follow-up probate records and check for an inquest, with the latter helping me confirm if the said Mary Ann was in Ararat Asylum.  But maybe Mary Ann was merely the female black sheep of her family and moved away from the fold and it’s possible that the male black sheep was living with her.  My reason for that thought is that my only other Harman connection to Ararat was Mary Ann’s brother Jonathan jnr. further supporting my case that I’m on the right track with Mary Ann.

After Jonathan jnr. married Hannah Keyte of Arapilis in 1904,  they moved to Kingaroy, Queensland.  Hannah appears to have remained in Queensland but Jonathan disappeared after 1913 reappearing again at the time of his death in 1941 at Ararat.  I do know that after Jonathan’s death there was an inquest, raising the possibility he was in Ararat Lunatic Asylum and a copy is now a must.  To think I have driven past the imposing building of Aradale, on a hill east of Ararat, hundreds of time, looking up and wondering what when on behind its walls.  Now I’m a few steps closer to discovering if members of my family knew exactly what life was like as an inmate. 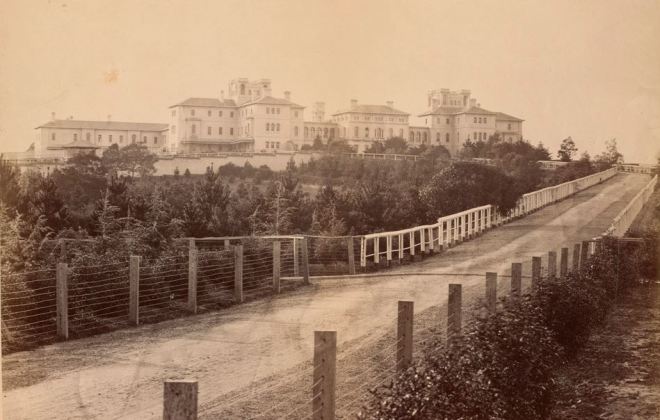 Writing the Harman family history has  helped me get to know Jonathan Harman snr.  better than I did before and it would be tragic if either or both Mary Ann and Jonathan jnr. were inmates at the Ararat Asylum.  Between 1871 and 1886, he saw the passing of three of his 10 children and his wife Mary at just 43. Then, one by one, his remaining children moved away from Byaduk leaving him alone, while his brothers’ children continued on in the town, growing and prospering.

So in conclusion,  to all of you, including the Annett family researchers, never give up hope that you will one day find your Mary Ann.

**Tours are now held within Aradale, during the day by the Friends of J Ward (a hospital for the criminally insane also in Ararat) and ghost tours by night,conducted by Eerie Tours .Aradale operated from 1867 until 1998.

3 thoughts on “Looking for Mary Ann”