Do you have a favourite Australian genealogy record?  For me, it’s the Electoral Rolls.  When they first became available at Ancestry, I spent hours finding addresses, checking Google maps, finding occupations, spouses and unusual living arrangements.

That’s when I came to grow fond of a little branch of my Diwell family.  The head of the family was Thomas Edward Diwell, my 3 x great uncle, and his wife, Mary Jane Pretlove.  Thomas, a blacksmith, was the son of the first Diwell arrivals to the Western District, William Diwell and Margaret Ann Turner.  He was born at Casterton in 1864 while Mary Jane Pretlove was born at Sandford in 1870.  Thomas and Mary Jane married at Sandford in 1899 with their first child, William, born at Casterton in 1890. 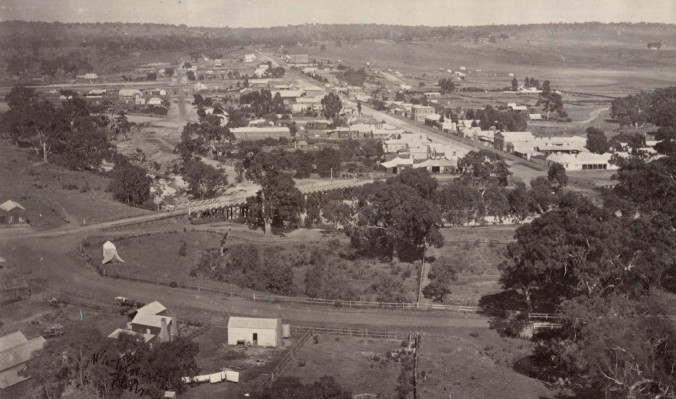 Then Thomas took his family further than any of his family had been before within Australia and moved to Balranald in south-west New South Wales where they remained for some years.   Nine children were born in Balranald, including a set of twins.  Sadly they lost two children, including one of the twins.  In 1913, eldest daughter Florence married at Balranald.

Around 1914, some of the family moved back to the Western District. Thomas and Mary Jane were living in Kennedy Street, Hamilton with Thomas working as a blacksmith. Another daughter, Eva Muriel, was born at Hamilton.  Eldest son William was at Dartmoor, also working as a blacksmith.  At some point before 1919, Mary Jane and some of the children moved to Carlton, while Thomas seems to have travelled for work, listed at Donald and Beenak on the 1919 Electoral Rolls.   But not everyone was living together.  Third child, Daisy Isabel, aged 26,  was working as a packer and living at 171 Drummond Street Carlton, older brother William, a returned serviceman, was a student and living at 53 Barkley Street Carlton and mother Mary Jane, presumably with the younger children, was at 203 Drummond Street, Carlton.

By 1924, the family had moved to 134 Johnston Street, Fitzroy (below), during a colourful period in that suburb’s history.  Father Thomas was, according to the Electoral Rolls, not in Melbourne, but instead living at Beenak in the Warburton area at least until 1928.  He reappeared on the Electoral Roll with the family in 1931, by which time they had moved next door to 132 Johnston Street Fitzroy (below).

So here was a family, used to living in an isolated country town, now residing in Melbourne’s bustling and bursting inner north, renown for slums and crime.  That alone captured my interest.  But what really attracted me to the family, particularly Daisy, other than her lovely name, was her occupation on the Electoral Rolls was “confectioner”.  Taking that clue, I found  MacRobertson chocolates had a factory in Fitzroy, just down the road from the Diwells, so there was a strong possibility Daisy worked there, making some of my favourites, including Freddo Frogs and Cherry Ripes.  Even sweeter.  I put Daisy away for a while…until recently.

A new discovery, an article from Adelaide’s Daily Herald, has me liking Daisy even more because Daisy fought for workers’ rights, particularly female workers, with her involvement with the Female Confectioners Union.

The Victorian Branch of the Female Confectioners Union, formed in 1916, met for their annual conference in February 1921, the subject of the Daily Herald‘s article.  Mr E.H.A Smith, the union secretary, reported on the progress the union had made during the previous six months.  Wages had increased, eight days paid leave achieved and, in just six months, the union had increased in number by 474, with most of the women employed in confectionery manufacturing being paid members.

Mr Smith then passed on his congratulations to the leaders of the union, pointing out the unselfish work done by Margaret Wearne, the general secretary and Daisy Diwell, the treasurer, two pioneers of the union.

By the end of 1921, the female confectioners had achieved another pay increase.

Naturally, after that find, I had to keep digging.  Some bits and pieces came up, but finally, I found a recent essay, “A fine and self-reliant group of women”: Women’s leadership in the female confectioners union”  by Cathy Brigden (2013).  From that, I found out a lot more about Daisy.  She did work at MacRobertsons and had been there since at least 1918.  Also, when living at 171 Drummond Street, Carlton, she was boarding at the home of two of her co-workers and union members,  Elsie and Maud Hood and their parents.

Brigden’s study revealed, the three girls, Daisy, Elsie and Maud came to the fore as leaders of the union in 1918, tirelessly recruiting other girls to the union and Daisy became treasurer.  It was, however, that dedication that contributed to the failing of Daisy’s health and in 1921 it forced her resignation from her union role.

Despite not being a union official, it does seem Daisy kept working at MacRobertsons with her occupation listed as confectioner up until the 1943 Electoral Roll, four years before her death.  Since her last change of address was for the 1928 Electoral roll, I can only assume she was a confectioner up until that time, but it is unlikely she took the trouble to update her occupation on the Electoral rolls when she had no need to update her address.

Since the Electoral Rolls have been available up until 1980 on Ancestry, I have been wary of assuming a person remained in their listed occupation when they did not move their residence.  I realised this when I saw my mother’s entries on the 1977 and 1980 rolls  In 1977 she was a teacher and in 1980, again a teacher.  However, she left teaching around 77/78, and was a business proprietor in 1980, but did not change address between 1972 and 1995.  Therefore if I were to check the Electoral Rolls beyond 1980, Mum is probably listed as a teacher up until 1995 when she had to change her address details with the Electoral Office.  That’s going to confuse some eager genealogist in the future.

Daisy died in Fitzroy in 1947 aged 54. She never married and predeceased her mother Mary Jane, by seven years.  Thomas passed away in 1932 and Mary Jane continued to live at 132 Johnston Street, Fitzroy with her daughter Margaret, also a confectionery worker.

So who or what was MacRobertsons?  In 1880, MacRobertsons had humble beginnings in the family bathroom in Fitzroy, of Ballarat born Macpherson Robertson, then aged 21.  The business grew from a small bathroom to the huge factory where Daisy worked.  Everything at the factory was white and it was known as “White City”. The factory workers wore white. the buildings were white, the delivery horses were white and even Macpherson Robertson wore white.

The factory was self-sufficient with even the chocolate boxes produced there.

Robertson was a father figure to his staff, had an interest in their welfare and supported the Female Confectioners Union.  In 1921, he authored a book,  A Young Man and a Nail Can: An Industrial Romance.  MacRobertsons introduced fairy floss and chewing gum to Australia and by 1923, the business had grown to 2000 employees earning a total sum of £350,00 per annum and the profits were flowing.

As I read about Macpherson Robertson.  I kept thinking, “Didn’t Roald Dahl write about this guy?”.  Then I found an article by Kirstin Masters, entitled Australia’s Willy Wonka: From Home Candy-Making to Confectionery Magnate.   Say no more. 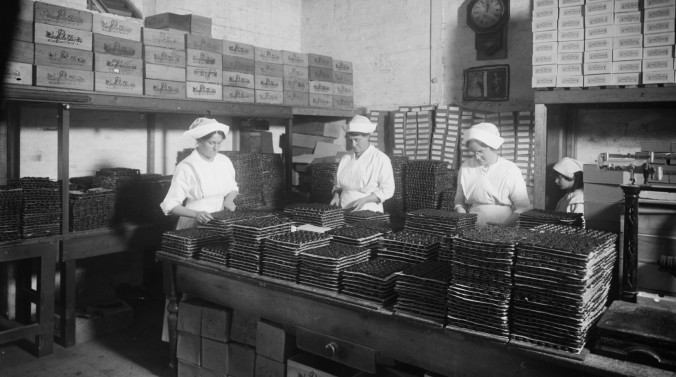 PACKING TRAYS OF CHOCOLATES AT MACROBERTSONS. Image courtesy of the State Library of Victoria http://handle.slv.vic.gov.au/10381/32249

SORTING CHOCOLATES AT MACROBERTSONS. Image courtesy of the State Library of Victoria http://handle.slv.vic.gov.au/10381/32370

PACKAGING LINE AT MACROBERTSONS. Image courtesy of the State Library of Victoria http://handle.slv.vic.gov.au/10381/417436

THE PACKAGING LINE AT MACROBERTSONS. Image courtesy of the State Library of Victoria http://handle.slv.vic.gov.au/10381/32370

Now that I have found this latest information about Daisy, it has opened up a whole new line of research.  Just for starters, there are four archive boxes of minutes, copies of the “Women’s Clarion“, the union’s journal, and photographs held by the University of Melbourne Archives.  There is a multitude of histories about MacRobertsons and the man behind the brand, so I’ll be reading everything I can from that respect.

I would like to know more about the two residences, 132 and 134 Johnston Street, Fitzroy where members of the family resided for at least 33 years.  I wish the Electoral Rolls were more Census like because I’m interested in who, other than the Diwell family, may have lived at the two homes over the course of three decades.  Also, how long did father Thomas live and work near Warburton and did Daisy’s sister Margaret have any involvement with the union during her time as a confectioner?  Finally, my interest in Carlton and Fitzroy during the 1910s, 20s and 30s has grown and I will do more reading about the two suburbs to learn more about the life of Daisy and the Diwell family.  There are also tours of the MacRobertson factory site, a great way to get the feel for Daisy’s working life.  The Melbourne Chocolate History Tours site has some great photos of MacRobertsons.  I will try to do all this… when I find the time…

Until the next update on sweet Daisy, here are some wonderful advertisements for my favourite MacRobertson’s products, from the Australian Women’s Weekly. 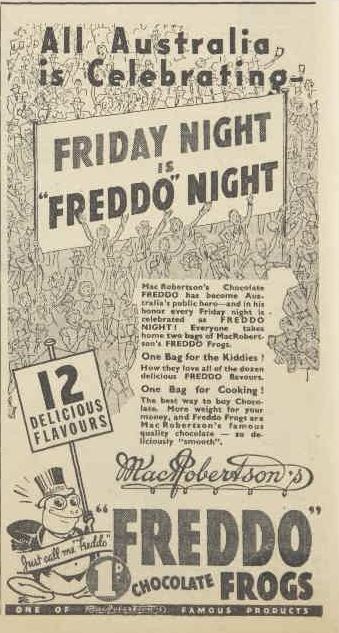