They should have known something when I suggested we go to Nelson for a few days.   Like last year when we travelled to Portland, I had found a destination that would covertly satisfy some of my family history needs while still appealing to the other family members.

Back in April, I received an email from Daryl Povey from the Glenelg & Wannon Settlers site.  Daryl had been at the Digby Hall for ANZAC day and spoke to an old school friend, Doug.  Doug had purchased a property near Digby some time ago and had found an army issue backpack hanging on a door in the house.  It was in good condition and had the name Pte E. H. Gamble written on it.  Daryl knew of my Gamble link and asked me if E.H. was a relative.  He most certainly was, he was my great-uncle, Ernest Hiram Gamble

Ernest Hiram Gamble was born in 1915 at Hamilton, the third son of Joseph Henry Gamble and Edith Diwell.  My grandfather, William Henry, was the oldest son and was four years older than Ern.

The following photo is L:  Ern, Norm, Bill (my grandfather).  This is one of my favourite Gamble photos. 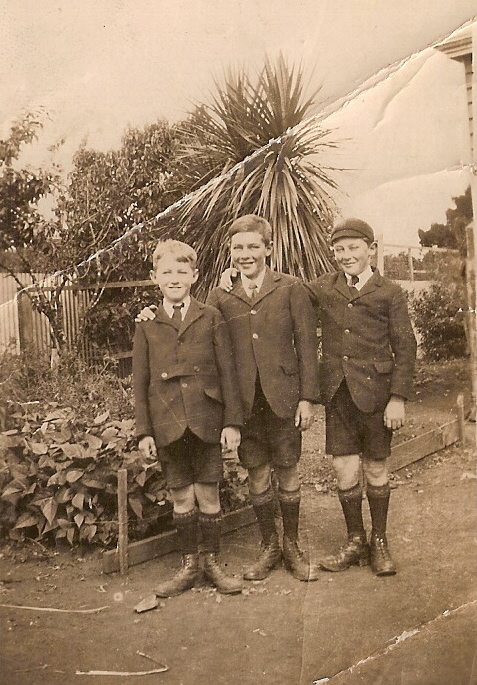 There is a lot in the photo.  The boy’s shoes – aren’t they great?  The boy’s jackets – All different and probably all from different sources, but still Edith ensured her boys looked smart.   The garden – I have an interest in Australian gardening history and the photo offers a glimpse into a 1920s backyard.  The smiles – it is heartening to see this picture taken in the early 1920s.  The boys look so happy and pleased to be together.

In the years earlier, the boys went through a period of separation.  Joseph and Edith moved from Hamilton to Moonee Ponds for a short time, living not far from Josephs’ brother Albert.  My grandfather and possibly some of the other children spent some time in Ballarat. He even appears on the Macarthur Street State School records.  The family returned to Hamilton in the early 1920s and three more children were born.  Life was tough at times but Edith, with her happy spirit,  kept them smiling.

In 1940, Ernest married Jean Lillian Watts and they moved to Mt Gambier.  Ern had worked as a grocer in Hamilton with Moran & Cato Pty Ltd a leading Australian grocery chain of the time and he transferred to their Mt. Gambier store.  A keen musician, a love passed through the Diwell line, Ern got involved with  local dances playing with his friend Colin McKinnon. The duo also performed in Amateur Hours such as the following at Mt Gambier in 1942.

On April 22,  1942, aged 27, Ern enlisted at Mt Gambier for service in WW2.  An appointment was made with The Arthur Studio in Mt. Gambier for a photo session for posterity. 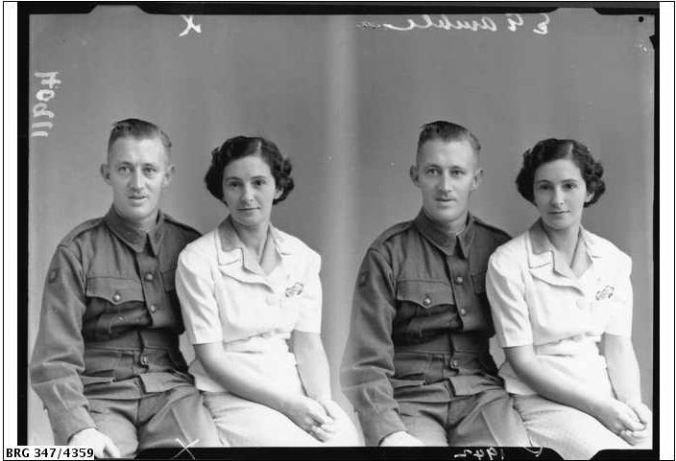 Ern’s work place gave him a send off and he set off to Adelaide for training in early October 1942. 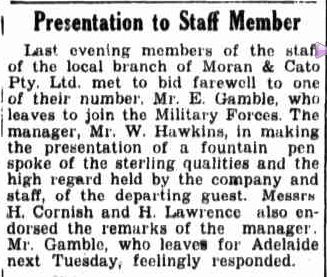 At the time of his discharge, Ern was a corporal with the 1st Australian Base Ordnance Depot that, from what I can work out, was in Brisbane.  By the end of the war there was an Ordnance Depot at Bandiana in Victoria and I have found this referred to as the 1st Ordnance Depot.  The role of the Ordnance Corps is detailed below:

After the war, Ern and Jean welcomed a son, John Ernest.  They were living in Melbourne by that time.

This is another lovely Gamble photo.  Here Edith, surrounded by her family, and with a big smile,  looks so proud.  Ern is back right and my grandfather, back left.  This was from a series of photos taken on  a day the family managed to all come together from Melbourne, Ballarat and beyond.  My mum and Ern’s son John were only toddlers, so I think it may have been around 1948 and Edith was living at 18 Skene Street, Hamilton. 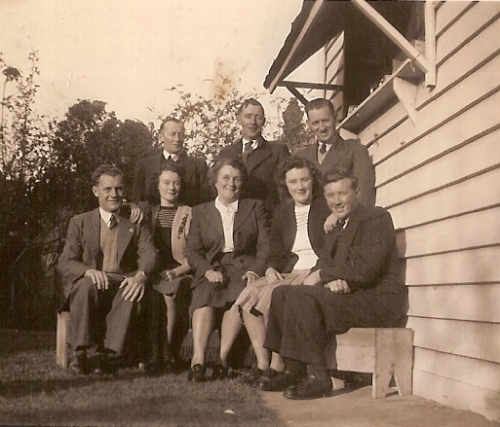 So that was it,  I had decided.  We were off to Nelson with its great fishing and oh, did I mention we would just happen to pass right by Doug’s house on the way?

We met up with Doug and his wonderful farm dogs.  What a great bloke Doug is, realising the backpack might hold some special family meaning and for looking after it until the day he may find some one who knew Pte E. H. Gamble.

For over 60 years, Ern’s backpack hung on a door in a farmhouse, waiting for its owner to return.  The story of how it came to be there is not yet clear.  The house was previously owned by Ronald Mabbitt, a Digby man.  He passed away in 2005.  Ron did enlist in WW2, and when discharged he was with the 2/32 Australian Infantry Battalion.   Maybe their paths crossed during the war or maybe Ron was a musician.  Ron must have thought a lot of Ern to keep his backpack so long, hoping one day his friend may return.

Thank you to Daryl Povey for contacting me and passing on Doug’s details.  Your help is always appreciated.

10 thoughts on “Pack Up Your Troubles”