The first Christmas of the 1900s was like many others the people of Australia would face over the next 50 or so years.  Australian troops were overseas fighting and in 1900 it was the Boer War in South Africa.  Over the course of the war, about 16,000 Australians left to  fight.  It was not the first Christmas troops had been in South Africa but as the reporter for the Fitzroy City Press says “Who could have dreamed then that yet another Christmas must pass before the trouble could be settled…”

While the Horsham Times also lamented the ongoing war, there was a sense of celebration with Federation just around the corner.  “Thus what has been the dream and the ideal of all true colonials for a quarter of a century past has been practically realised”.  With such a large celebration ahead, there was a propensity to overlook Christmas 1900.  The Commonwealth Inauguration was itself a “splendid Christmas box to Australia, to the British Empire and, without exaggeration, it may be said, to civilization”

Tulloh and Company was the place to go in Colac for all Christmas gifts.  For girls, there were wicker prams and strong go-carts, while gifts for boys included hobby horses and pop-guns.

On Christmas Day 1901, the Clear Lake Wesleyan Church and Sabbath school held their annual picnic.  With a lovely lunch served and shelter sheds and seats provided for the ladies, an enjoyable day was had by all.

The Girls Friendly Society held their annual Christmas tree at the Horsham Mechanics’ Hall with over 100 children receiving a gift. 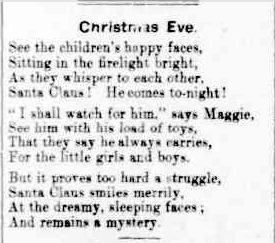 Christmas Day of 1901 was quiet in Colac after a busy Christmas Eve with much last-minute shopping.

This flaming plum pudding would have made a spectacular entrance to the dining room.

1902 was a drought year and the Hamilton Relief Committee helped out the towns of Warracknabeal, Hopetoun and Beulah with a donation of 60 sheep and other Christmas goodies.

A  Benevolent Asylum is a place one would rather not be on Christmas Day, but in Portland, 1902, best efforts were made to make sure the day was memorable for inmates.  The fare was roastbeef, ham and goose and the Benevolent Asylum superintendent provided inmates with a drink (read “ale”), fruit cake and tobacco 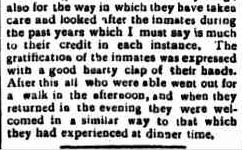 The Colac Herald of December 11, 1903 provided tips for making the Christmas pudding along with three variations of the recipe.

What is Christmas without a corny cracker joke.  They were just as corny in 1904 as they are today.

Some Christmas gift ideas from 1905.

No reindeer for Santa in 1906, rather an eagle as depicted by Miss. M. Scott. 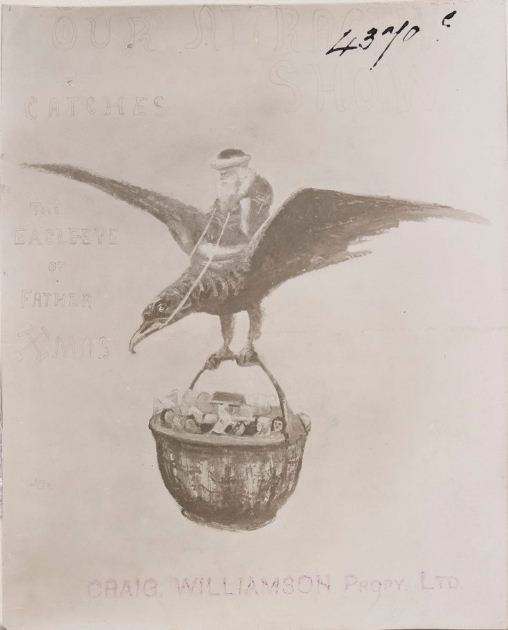 Horsham residents were well serviced by the local shops during the Christmas lead-up of 1906.

The Colac Herald published a list of  local shops and their Christmas wares.  Mrs Walkers’ shop was sure to have been a favourite with the local children in 1907.

Christmas Eve of 1907 in Horsham was a busy night.  Decorations, carolers, and children with musical instruments added to the atmosphere of the evening.

Christmas boxes were given to servants, usually on Boxing Day and were either money or a gift. 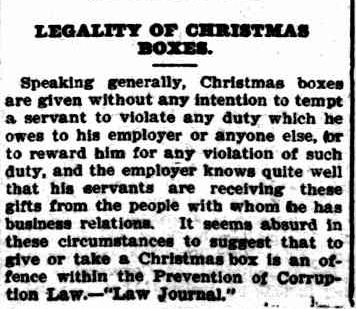 People stayed in the streets of Portland until 11.30pm on Christmas Eve 1908, entertained provided by the Portland Band. 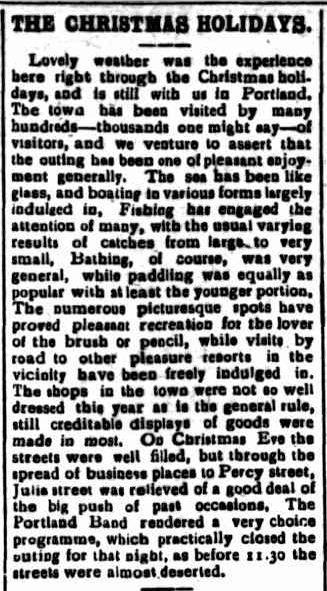 By 1909 there were still plenty of mail coming from the Old Country.  In one day there were 300 letters, 50 papers and 40 packages to Horsham from England. 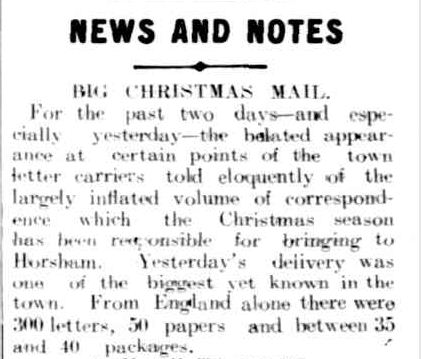 Last minute shoppers suffered the wrath of the Portland Guardian in 1909.  They were reminded to think of the shopkeepers who also had Christmas preparations and families to go to.  Shoppers were out until after 10pm and at 11pm the Portland Public Band entertained those still out on the streets.

This article gives us some of idea of the current affairs of 1909.  It mentions the “Waratah” which months earlier had vanished without a trace on a return trip to England.  On board were passengers that embarked at the ports of  Adelaide, Melbourne and Sydney.

Newcastle coal miners were on strike but that didn’t prevent Portland turning on the lights on Christmas Eve.

The stockings were up on Christmas Eve 1909 in Horsham. 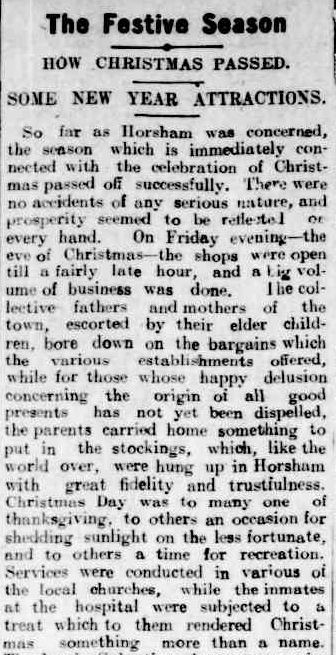