On 3 October 1857, a small grey mare known as “Alice” lined up for a match race with her rival Veno, from the colony of New South Wales (NSW), a race that would in time be remembered for its significance in setting the foundations for what has become Australia’s greatest horse race and strengthening the thoroughbred racing and breeding industry in Australia.  It was a time when inter-colonial rivalry was high, but this period of racing’s history shows that the racing fraternities of each colony, while still highly competitive, were able to work together in a harmonious way to develop the industry we have today. This story is not so much about the match race,  rather the life of the grey mare and the mark she left on Australian racing history.

“Alice”, bred at Mt William Station in the Western District and owned by great racing supporters, the Chirnsides, was born sometime around 1849.  Her sire was Delpare, an imported horse and her dam, Polly McQuinn, a part-Arab mare, bloodlines common in the early days of racing in Australia.  “Alice” was branded with the Chirnside’s  “key” brand.  Horses bearing that brand could never be sold.

At age three “Alice” was broken in and she spent time as a stock horse but, unlike her mother, she was not a good riding horse.  The Chinese workers at the station used her to carry rations to workers situated at out stations on the property but she developed a fistula wither, a painful condition, and was turned out.  During that time she became loose on the station roaming the bush for fifteen months. She ran with a wild horse and the result was a foal which died.  Time in the bush had not served her well, but back on pasture, she blossomed.

Put to work again, “Alice” was used by Robert Christison, a horse-breaker at Mt William, to act as  “nursemaid” to the young thoroughbreds he was breaking in.  On one occasion, the young horses had missed a muster and Christison chose  “Alice” to bring them back to the main paddock.  What a surprise he received.  This article, “Racing and Romance, Two Western Mares” includes excerpts from the book “After Many Days” by Cuthbert Fetherstonhaugh that recount that day:

The little mare, who not long before had roamed the bush, impressed and ousted the talented Miss Campbell from her prime stall in the stables.  She was also given her name,  Alice Hawthorn.

Her first race was at Hamilton over a mile and a half.  “Alice” won, kicking off a remarkable career which would span the next four years.  As was racing in those times, “Alice” returned to Hamilton the following day and backed up the win. 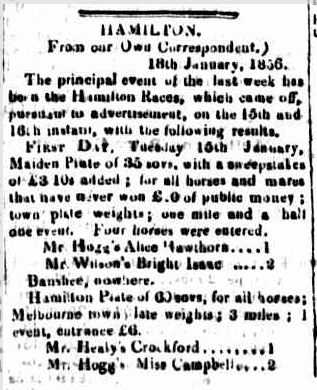 It was not long before Alice Hawthorn was racing at Ballarat, Geelong, and then Flemington.  This sketch shows her storming down the outside to win the Turf Club Autumn Cup of 1857.

It was this race and others that saw Alice Hawthorn considered one of Victoria’s best horses and in turn, her name was given as a challenger to a horse from NSW in a match race of £1000 aside.  The Victorians wanted to nominate three horses and select the best on the day, however, this was rejected by their NSW. colleagues who nominated just one horse, the chestnut Veno.  Alice Hawthorn, it was. 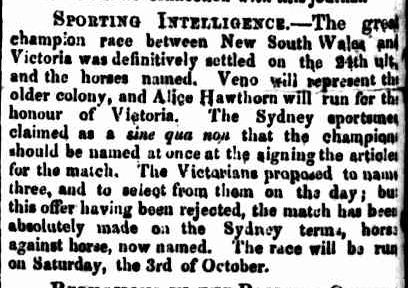 There was some doubt in the minds of the Victorians that “Alice” was up to the task and her odds went out.  Others considered the home track advantage would help her.  Veno’s arrival in Melbourne created much interest with crowds of people gathering to see the Sydney horse.

Meanwhile, there were security fears for “Alice’ and her trainer Mr Green built a stable at his home to accommodate her safely. 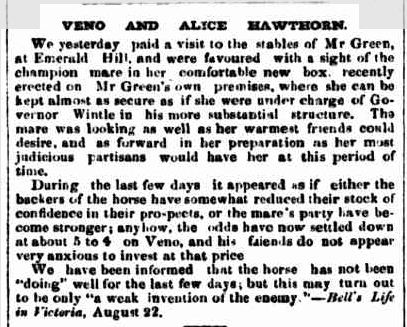 This thorough description of “Alice”, including her physique, action, and temperament is unlike anything seen today.  The Melbourne correspondent noted her “fine, even temper which nothing can ruffle is the theme of universal admiration”.  Jokes were often made about her arrival at the starting line for races, looking like she had just woken from a sleep. This probably helped her settle in her races and run out the three miles. 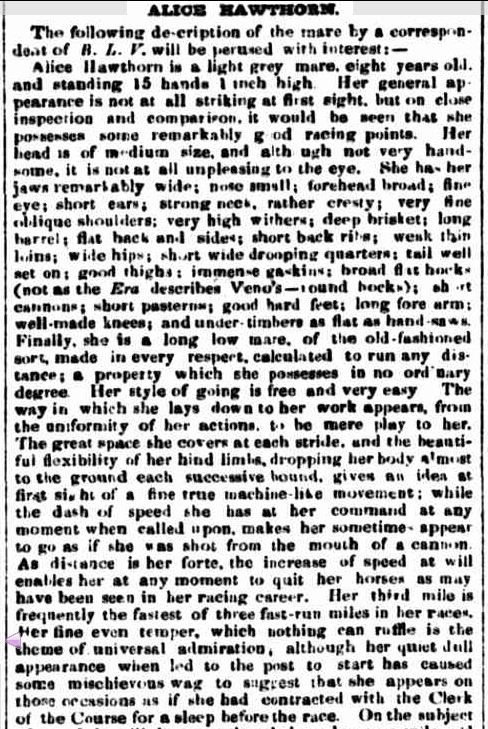 Those attending the Great Inter-Colonial Match race from Sydney could take up the offer from the Australian Steam Navigation Company of a return ticket at a reduced rate.

In the preceding days, something akin to the call of the card was held at the Tattersall’s Hotel in Russell Street, where the original challenge was offered.  A healthy amount of money was wagered, all with a sense of good sportsmanship. 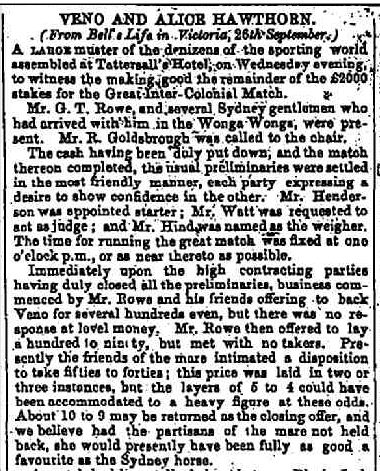 Chair, Mr Goldsborough welcomed the sporting men of Sydney, including trainer Mr Rowe, and reassured them that they “would be met upon all occasions in the hearty spirit of true sportsmen”.

At the gathering, a decision was made to set up a subscription room at the Tattersalls Hotel for those of “good respectability and conduct’ for a season ticket of ten shillings.  The Produce Stakes was also devised, open to horses from all colonies.

On the morning of 3 October 1857, all roads led to Flemington.  For others, a steamer up the Saltwater River (Maribyrnong River) was the preferred transport.

As feared by many Victorians, it was not Alice Hawthorn’s day, with Veno winning the three-mile race.  “Alice” was not disgraced but could not match the stamina of Veno.

Veno’s trainer accepted another challenge with the horse backing up two races later against Victorian Van Tromp.  Veno raced another three miles, finishing in a faster time than his race against “Alice”, beating Van Tromp by two lengths.

The Victorian racing fraternity was left questioning their horses’ bloodlines and those from the colony of NSW left no doubt where Veno hailed from as this headline from the Empire, a Sydney newspaper shows.

This article from The Argus, written in the days, stressed how important breeding better Victorian horses was if they were to match it with the other colonies and the need for good horse races such as the match race, to make sure that the standard of horse improved.

It was not long before “Alice” was back racing and on 2 December she was at Ballarat, once again a winner. 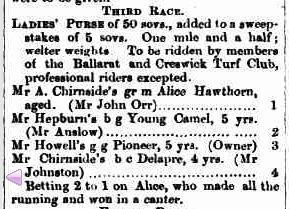 On Thursday 18 February 1858, Alice Hawthorn won the Great Metropolitan Handicap at Flemington, redeeming herself with those who dismissed her both before and after her match race with Veno. 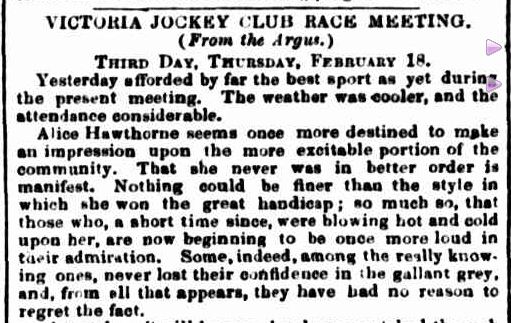 “Alice” continued to race and win.  Just over twelve months after her match race, she was still considered Victoria’s leading three miler, although some thought this was because she had nothing to beat.

The 1 October 1859 was the first running of the Australian Champion Sweepstakes at Flemington racecourse.  Horses from the colonies of South Australia, New South Wales, and Tasmania were among the entries, true inter-colonial racing.

One of the entries, The Barber from South Australia, had an unfortunate and unexpected link to the Western District. The Barber’s transportation to Melbourne was the steamer Admella.  The Admella struck trouble along the South Australian coast near the Victorian border and the Portland lifeboat Ladybird with Captain James Fawthrop at her helm went to the rescue.  All the horses aboard the steamer drowned, except for The Barber, who amazingly came to shore, two and a half miles away from the wreck.  He was then walked overland to Geelong and travelled by rail to Melbourne.  Not surprisingly he finished close to the tail of the field in the Sweepstakes.

“Alice”, by this time at least ten years old, acquitted herself well in the three-mile race running fourth behind the winner Victorian Flying Buck,  a three-year-old.

Alice Hawthorn ran her last race in November 1859 in the Turf Club Welter Handicap over three miles.  She won by ten lengths and retired with £5000 in stakes money, the highest of any horse in the colonies.

The Chirnsides sent their mare to stud for a meeting with their imported stallion Peeping Tom. It is not clear if the mating was successful.

On 12 August 1860, the mare they called “Alice” passed away at the Chirnside’s Point Cook at twelve years of age, only nine months out of racing.  Her lungs that gave her the stamina to run long distances had failed her.

“Alice” went from the foothills of the Grampians to matching it with some of the leading horses in Victoria and the other colonies.  She easily could have remained at Mount William Station as nursemaid to the future stars of the Chirnside’s stables.  It was only for her demonstration of brilliance rounding up the escaped horses that saw her rise to becoming a household name.   She saw hard racing considering many of her races were over three miles, a mile further than the Melbourne Cup.  Horses from her time could run two three mile races in a day, just as Veno did on 3 October 1857.

In 1861, the first Melbourne Cup was run.  Racing was building up to a race like the Cup from the time of the Great Inter-Colonial match race, the Great Metropolitan Handicap and the Sweepstakes, but unlike those races, it has endured and strengthened over 150 years.  Racing was evolving, as it was suggested it should after the 1857 match race, by creating great horse races to improve the stock.  Unfortunately for Victoria, Archer from N.S.W. won the first two cups.  Banker, bred by Woodend hotel keeper Joseph Harper, finally won for the colony in 1863.  The Great Inter-Colonial match race began the stream of horses across the borders to race in Victoria.  Today, Victorian racing is International, with overseas horses not only racing here in the spring but taking the main prize.

Alice Hawthorn and her rivals of the time have a place in Australian racing history.  While the leaders of the Australian colonies were struggling to work together on a united front, the connections of these horses were showing their political counterparts how to do it.  The Sporting Notes of The Argus of 24 March 1865 praised those involved in racing.  Between the Great Inter-Colonial match race in 1857 and 1865, the racing clubs of the colonies had agreed on a single birth date for all thoroughbreds, August 1 and Victoria had revised its Weight for Age system to come into line with the other colonies.  The correspondent said “It would be remarkable if meeting pleasantly on the neutral ground of sport, the Australian colonies were thereby hereafter to meet in an equally friendly spirit to deal with  more important questions”

At the time of the death of Andrew Chirnside,  The Border Watch reported that Alice Hawthorn helped make his name in racing circles. 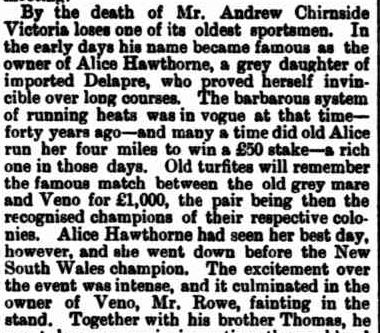 The talk of her continued for years after.  Donald McDonald, in 1928, put Alice Hawthorn’s racing career into perspective.