Collecting the obituaries for August Passing of the Pioneers, I discovered that many of the pioneers had either worked for or had a father who for the Henty brothers. Hannah Spiken and Elizabeth Stevenson were both born at the time their fathers worked for the Hentys, with Elizabeth born at Munthum Station.  Harriet Tate was also at Munthum Station where she worked as a nursemaid.

There is also the story of John Bodey who lived to 106 and Mary Finn who’s husband’s family operated the Glenelg Inn, around which the town of Casterton grew. The hotel still operates today. Also included are two of the wealthier pioneers of the Western District, Alexander Davidson and James Whyte.

Alexander DAVIDSON: Died 17 August 1874 at Portland. Western Victorian squatter, Alexander Davidson was born in Inverness, Scotland in 1801. He acquired his wealth during his time as co-owner of Satimer station at Wando Vale. In later life, he built the Portland home, Wando Villa, and contributed extensively to the Portland Wesleyan Church. The Glenelg and Wannon Settlers website has further information on Alexander Davidson on the Wando Vale settlers page.

James WHYTE: Died August 1882 at Hobart, Tasmania. James Whyte and his brothers were pioneers of Coleraine, with the main street named in their honour. Born in Scotland in 1820, Whyte arrived in Tasmania with his family in 1832. In 1837, James and his brothers William, George, Pringle, and John arrived in Port Phillip settling at Konowootong near Coleraine.

James then moved to Clunes taking co-ownership of a large station where gold was later discovered. In 1853, he returned to Tasmania, a much richer man and ran for the seat of Brighton during the 1854 election. He was unsuccessful, but ran again in 1856 and won a seat in the Legislative Council of Tasmania.  In 1863, he became Premier, holding the post until 1866.

Despite their name held in perpetuum at Coleraine and with a state leader among them, the Whyte Brothers are part of the darker history of the Western District. In 1840, the brothers massacred at least one hundred aboriginals at The Hummocks near Wando Vale on two separate occasions. More information about what is known as the Fighting Waterholes Massacre and Fighting Hills Massacre can be found on the link to an ABC article.

Joseph COUCH:  Died 30 August 1911 at Portland. Joseph Couch, born in Cornwall, arrived in Victoria aboard the Mary Ann in 1856.  He spent 17 years working for Edward Henty before taking up the role of curator of the Portland Botanic Gardens.  Joseph was the curator for twenty-six years demonstrating a great knowledge of plants and a passion for the gardens.  Joseph’s memory continues with his name on a plaque on the curator’s cottage at the gardens. 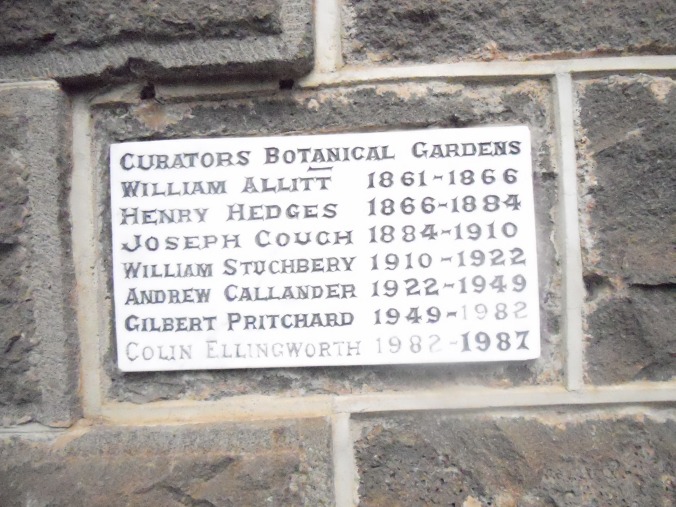 Mary FINN:  Died 15 August 1913 at Kew. Mary Finn was born in Ireland and arrived on the ship Susan in 1839 with her family. In 1852, Mary married Edmund Kirby, one of Casterton’s earliest settlers.  The marriage took place at the Glenelg Inn built on a part of Springbank station run by Edmund Kirby, his brother James and sister Mary. The Kirby’s later took on the ownership of the hotel, previously operated by Mary’s late husband, and the town of Casterton grew around it. The Glenelg Inn still operates today.  One of her sons was John Finn Kirby, owner of 1911 Melbourne Cup winner, The Parisian.  More information on the Kirby family is on the Glenelg and Wannon settlers website.

John BODEY:  Died 21 August 1916 at Camperdown. Ireland native, John Bodey was born in 1810 making him 106 at the time of his death.  He lived through the reign of six British monarchs. This article appeared on his 100th birthday and outlines some of the events which occurred during John’s long life:

Having a keen interest in politics, John voted in a by-election at Warrnambool not long before his death. Upon John’s 105th birthday, his son George talked about his father’s longevity and independence.

Edwin Clough DERMER: Died 26 August 1917 at Ballarat. Edwin Dermer was born in London and worked as a clerk for the Bank of England where his father was a departmental manager.  At eighteen, Edwin headed to Australia where he became a gold buyer at Melbourne, before heading for the goldfields of Ballarat. After around twenty years on the diggings, Edwin moved into retail, first as a manager of a crockery shop and then manager of a drapery business.  He then opened a grocery business in Mair Street.

Work aside, Edwin was a founding member of the Druids Lodge, a member of the Orion Masonic Lodge, and president of the United Friendly Societies Dispensaries.  He had a keen interest in state and federal elections and served as a deputy returning officer for the electorate of Ballarat West.  In fifty years, he never missed a game of cricket in Ballarat.  One interesting point of interest in Edwin’s life was his wife was born in the same street in London and attended the same school, however, they did not meet until they came to Victoria.

Annie DONNELLY:  Died August 1933 at Warrnambool.  Annie Donnelly of Irish descent married James Percy Skeyhill.  They spent time at Terang where their son Thomas John Skeyhill was born in 1895. The family moved to Hamilton with Thomas educated at St Mary’s Convent School.  Thomas enlisted for WW1 and it changed his life. While at Gallipoli, a shell blinded Thomas and upon his return, he published his war poetry and travelled overseas on lecture tours.

The Sydney Morning Herald published an example of his poetry at the time of his death in 1932, as a result of an airplane accident in the United States.  The full obituary is here and another from a local perspective was in the Camperdown Chronicle published May 26, 1932

Annie and husband Thomas moved to Warrnambool where Thomas operated the Warrnambool Cordial Co. until his death in 1932, just a year before his wife.

Harriet TATE: Died August 1935 at Portland. Harriet Tate arrived in Australia from Ireland as a seven-year-old.  At just eighteen, she married William Jackman, an early Wimmera pioneer.  In her early years, Harriet worked for Edward Henty at Munthum Station.  William and Harriet moved to Portland in their later life, with Harriet spending the last twenty-five years of her life in the town.

Hannah SPIKEN:  Died 3 August1936 at Portland. Born in Portland around 1864 Hannah was the daughter of John and Hannah Spiken. John worked for the Hentys and Hannah was said to have followed behind the plough, planting potatoes.  At eighteen, she married Walter Dennis Pitts a union that lasted fifty-four years.

Elizabeth STEVENSON: Died 3 August 1938 at Coburg.  Elizabeth was born at Merino Downs around 1863, the daughter of Joseph and Mary Stevenson. Joseph was working for the Hentys at Munthum station at the time of her birth, but the family later moved to Portland.  Elizabeth married William James Dunne of Ararat and they spent some time in Portland before moving to Ballarat.

John NIDDRIE:  Died August 1939 at Hamilton. John Niddrie was born at Cherrymount near Glenthompson around 1865.  John and his four brothers spent much time in the bush as children and as a result, all became accomplished bushmen.  They also were able to climb tall trees, a skill they learnt from local aboriginals.  John married Florence James of Hamilton.  They were buried at the Hamilton (Old) Cemetery (below). 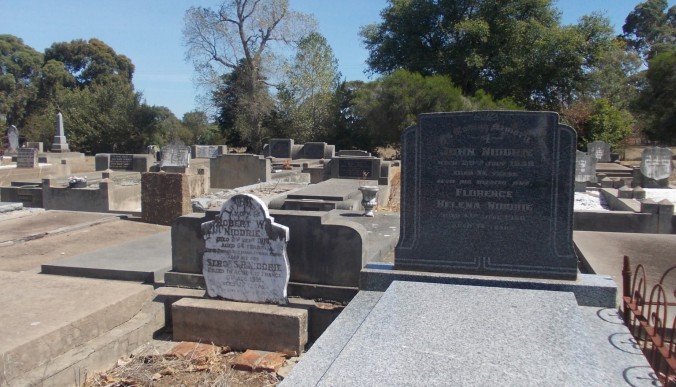 Henry Dyer RUNDELL:  Died August 1941 at Hamilton. Henry Rundell was a long time resident of Condah, the son of John and Mathilda Rundell.  John was from Cornwall and Mathilda from Somerset. Henry married Annie Dawkins and they celebrated their Golden Wedding anniversary only months before Henry’s death. Henry was a dairy farmer at his property Swamp View near Condah and he was a parishioner of the Church of England.