The following photo from the Museums Victoria collection was posted to the WDF Facebook page in October 2017 when the photo theme was animals.

The description with the photo reads as follows, “The horse ‘Daybreak’ or ‘Daydream’ (?), a champion hunter who won many equestrian events in the Wimmera and Western district. His certificates and prizes are displayed.”  The individuals identified were named as Ethel McIntyre and John Ross and the photo was taken at Douglas (north-east of Harrow) c1920.

Using those clues, I uncovered a wonderful story of a horse called Daystar and his owner John Hugh Ross. I also found John was part of a family I was familiar with from my Byaduk research.

Born around 1900, Daystar was by the sire Timmon out of the mare Phyllis. In the years 1905 and 1906, John Ross of Douglas (also known as Salt Lakes) was racing Daystar on the flat and over steeples at meetings including Casterton, Chetwynd, Wando Vale, and Hamilton. I couldn’t find him winning a race but he did run second a couple of times.

John also took Daystar on the show circuit, riding the horse in hurdle races and hunter classes and it turned out Daystar was a handy jumper. On 14 July 1909, at Douglas, John was schooling Daystar when the horse cleared a jump of 3ft 6in but it was not the height of the jump, rather the length which stood out.

From take-off to landing, Daystar jumped a width of thirty-nine feet (almost twelve metres). At the time, records dating back to 1847 were cited when another horse jumped thirty-seven feet. The current world record for a long jump by a horse across water is held by a horse called “Something” who jumped twenty-eight feet. (8.4 metres) in 1975.

John Ross was born at Knebsworth south-west of Byaduk in 1875. He left school and started working when he was thirteen.  In the 1890s John joined others from Victoria who travelled to the Western Australian goldfields but he was back in Victoria and living at Douglas by 1905. John was a blacksmith and purchased the Douglas blacksmith shop in 1908,  He was also a good footballer.

The young lady in the photo was named as Effie McIntyre. In 1913, John Ross married Effie Grace McIntyre at the Presbyterian Manse at Hamilton (below). 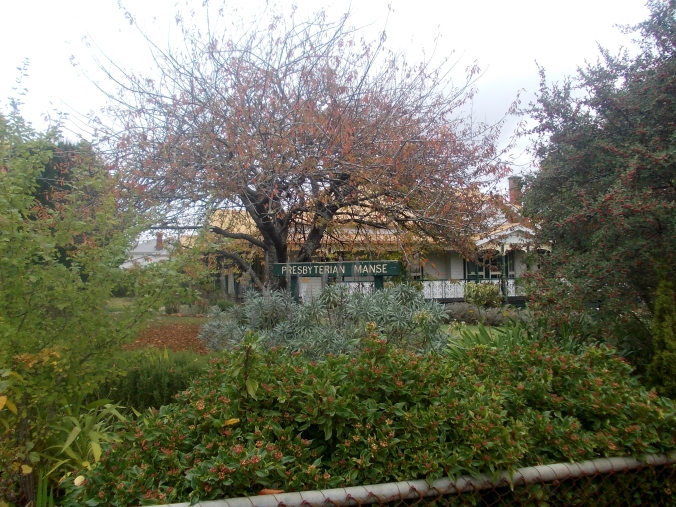 The wedding ceremony was followed by afternoon tea at the Caledonian Hotel where Daniel Scullion proposed a toast to the newlyweds on behalf of their parents.  John’s wedding gift to Effie was a gold broach and Effie gave John a gold watch guard.  The couple honeymooned in Warrnambool.

On their return to Douglas, a gathering was held and John and Effie were presented with fifty sovereigns from the locals. It was there Thomas Hobbs spoke of John and Daystar’s contribution to the community.  If someone was requiring medical assistance in the night, they just had to knock on John’s window and ask him to go to Harrow for the doctor. In no time Jack would be aboard “his favourite Daystar” and on his way. John thought he was only doing what he thought was his duty to help others whenever there was a chance.  The rides to Harrow were no trouble because he loved to spend time in the saddle.

John and Daystar continued to compete but in August 1914, Daystar then aged fourteen and with John aboard, dropped dead at the Edenhope P&A show during a round of a hurdle competition.  Daystar cleared the first two hurdles well but ran out at the third jump and dropped from beneath John. A sad and sudden end for Daystar. John must have been devastated not just to lose a horse but his companion. The news of Daystar’s death spread across the country. The story led the “News of the Day” in the Warracknabeal Herald (below). 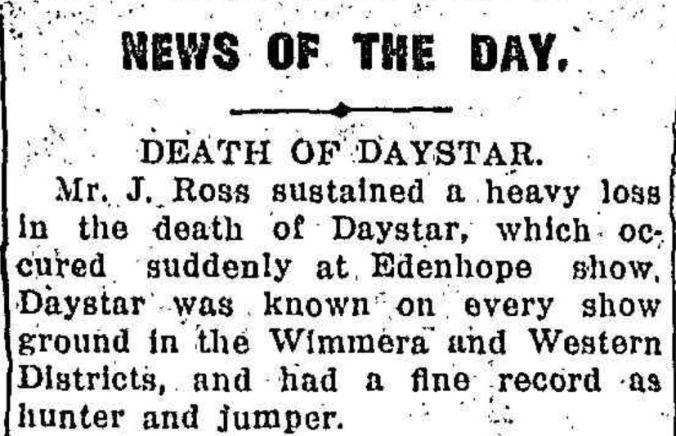 The Border Chronicle remarked on the coincidence that Daystar carrying number 13 (unlucky for some) had his first and last jumps competition at the Edenhope Show.

As for the Byaduk connection, if you’ve ever travelled through Byaduk, say going from Hamilton to Port Fairy, just past the Byaduk oval you will see the Byaduk Boer War Memorial to the right.  On it is the name of Donald Ross, killed in South Africa on 15 November 1900.

Across the road is the Byaduk War Memorial.

With the names of Andrew and Samuel Ross.

Donald, Andrew, and Samuel Ross were the sons of George Ross and Flora Cameron and younger brothers of John Ross. The boys’ father George died at Byaduk in 1895. Their mother Flora sent off son Donald to South Africa as part of the 1st Australian contingent. Three months after his return in August 1900, Donald was dead from a lung condition. When WW1 came, Flora sent three sons, Andrew, Samuel, and William. At the time of Andrew’s enlistment, the Hamilton Spectator wrote of the “Patriotic Family” 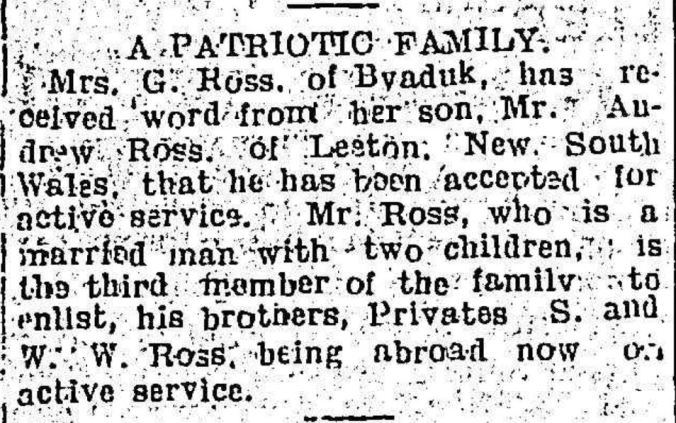 On 7 November 1917, Samuel Ross was killed in Palestine while serving with the 11th Australian Light Horse Regiment.  Andrew Ross returned from overseas but died of bronchitis on 10 June 1919.  William returned in 1919 and died at Red Cliffs in 1963.

Meanwhile, John and Effie were running the Douglas Post Office. John had taken over duties temporarily in 1917 when the postmaster at the time enlisted. They also built a new house at Douglas in 1937.

John Ross died at Douglas on 29 April 1949 aged seventy-three.  Later in the year, Effie was recognised by the people of Douglas for her service running the Douglas Post Office for over thirty years.  Effie died at Portland in 1976 aged eighty-five.