On 29 August 1836, Major Thomas Mitchell saw Portland Bay for the first time.  Since we last were with Mitchell on his freezing night on the summit of Mount William in July 1836, he and his party had travelled a great distance and being winter, the terrain was mostly muddy. From Mount William, the party had travelled north to and climbed Mount Zero. Then west along the northern Grampians to Mount Arapiles and Mitre Lake.  Scaling Mount Arapiles, which he named, Mitchell was able to see the country to the south and it was in that direction they next travelled. 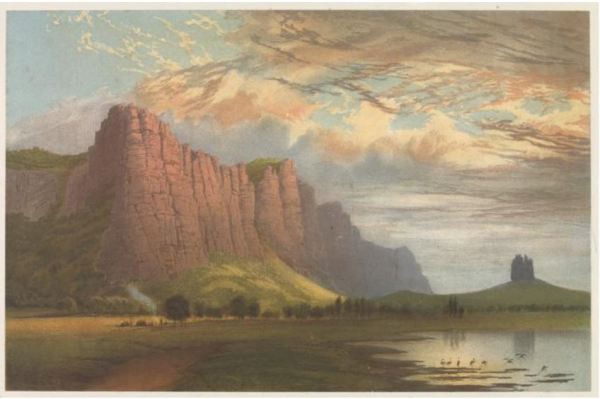 As they moved out of the Wimmera and into the Western District, Mitchell noted,

Thus suddenly were we at length relieved from all the difficulties of travelling in mud. We had solid granite beneath us; and instead of a level horizon the finely rounded points of ground presented by the sides of a valley thinly wooded and thickly covered with grass. This transition from all that we sought to avoid to all we could desire in the character of the country was so agreeable that I can record that evening as one of the happiest of my life.  (Mitchell, T. L. (Thomas Livingstone) Three expeditions into the interior of eastern Australia, Chapter 3.9)

They soon met the Glenelg River near Harrow on 31 July, and from there they passed through Pigeon Ponds, Chetwynd, and Wando Vale. On 7 August, the party reached the Wannon valley south of Casterton at the Wannon River’s junction with the Glenelg River and saw a beautiful scene before them.

After fording this stream with ascended a very steep but grassy mountain-side, and on reaching a brow of high land, what a noble prospect appeared, a river winding amongst meadows that were fully a mile broad and green as an emerald. Above them rose swelling hills of fantastic shapes, but all smooth and thickly covered with rich verdure. Behind these were higher hills, all having grass on their sides and trees on their summits, and extending east and west throughout the landscape as far as I could see. I hastened to ascertain the course of the river by riding about two miles along an entirely open grassy ridge, and then found again the Glenelg, flowing eastward towards an apparently much lower country. All our difficulties seemed thus already at an end, for we had here good firm ground, clear of timber, on which we could gallop once more. The river was making for the most promising bay on the coast (for I saw that it turned southward some miles below the hill on which I stood) through a country far surpassing in beauty and richness any part hitherto discovered. (Mitchell, T. L. (Thomas Livingstone) Three expeditions into the interior of eastern Australia, Chapter 3.10) 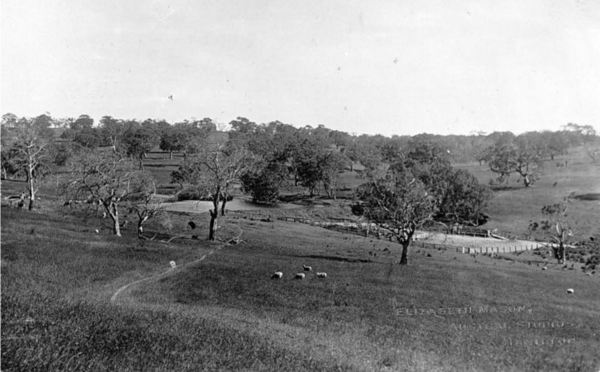 From there, they travelled to near where Dartmoor is today and Mitchell launched a boat on the Glenelg River at Fort O’Hare and with a small party, made his way to the sea. 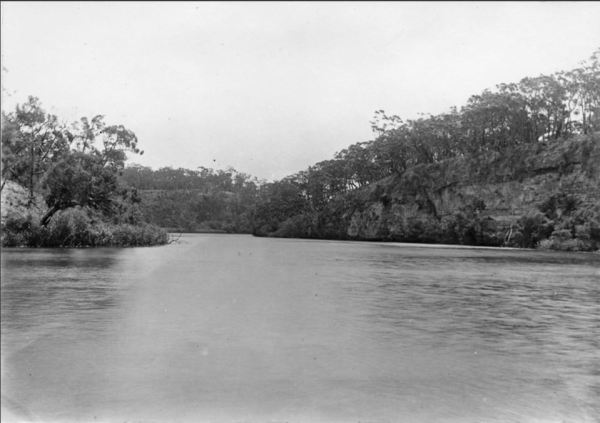 THE GLENELG RIVER. Image courtesy of the State Library of South Australia http://collections.slsa.sa.gov.au/resource/PRG+280/1/14/36

Expecting to come out near Portland Bay, they were further west, reaching the mouth of the river at what is now Nelson. 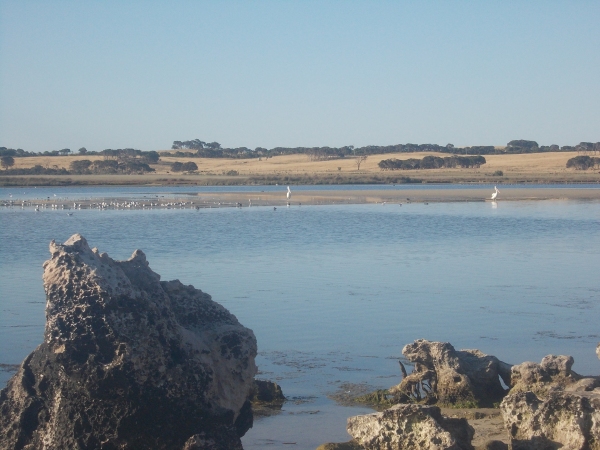 AT THE MOUTH OF THE GLENELG RIVER, NELSON

The party turned back up the river and returned to the camp at Fort O’Hare. They then travelled along the Crawford River and with the carts getting bogged down in heavy ground, Mitchell and a small party set out on horseback to Portland Bay.  Their first stop was near Heywood and a large hill Mitchell climbed and named Mount Eckersley.  From there they crossed the Fitzroy and Surry Rivers bringing us back to 29 August 1836 and Major Mitchell’s first sighting of the coast at Portland Bay.

Major Mitchell walked on to the beach littered with whale carcases, evidence of whalers in the area.  A member of the party, Aboriginal man Tommy Came-last, reported cattle tracks and the footprints of a white man.  Tobacco pipes and a broken bottle were also found, possibly from the whalers but they would not have had cattle.  Looking around the bay, Mitchell saw houses, possibly whalers huts, so they headed toward them.  Mitchell and his party descended high cliffs and could see a ship anchored in the bay.  Approaching the wooden houses they found they discovered they were abandoned whalers’ shacks but just as they were moving on, two shots rang out.  Mitchell ordered one of his men to fire off a shot and to sound the bugle.  They climbed to higher ground and found a cart track which they followed until a man approached them. Mitchell continues,

He informed me in answer to my questions that the vessel at anchor was the “Elizabeth” of Launceston; and that just round the point there was a considerable farming establishment belonging to Messrs. Henty, who were then at the house. It then occurred to me that I might there procure a small additional supply of provisions, especially of flour, as my men were on very reduced rations. I therefore approached the house and was kindly received and entertained by the Messrs. Henty who as I learnt had been established there during upwards of two years. It was very obvious indeed from the magnitude and extent of the buildings and the substantial fencing erected that both time and labour had been expended in their construction. A good garden stocked with abundance of vegetables already smiled on Portland Bay; the soil was very rich on the overhanging cliffs, and the potatoes and turnips produced there surpassed in magnitude and quality any I had ever seen elsewhere. (Mitchell, T. L. (Thomas Livingstone) Three expeditions into the interior of eastern Australia, Chapter 3.11)

The following day, Mitchell made a trip to Cape Nelson then returned to Portland. 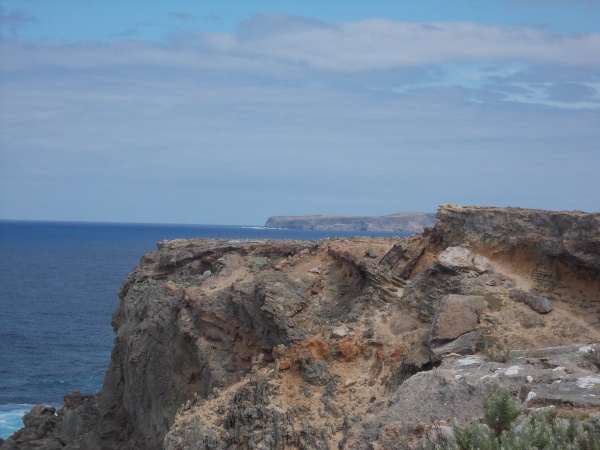 Major Mitchell said his goodbyes to the Hentys and continued on his way. 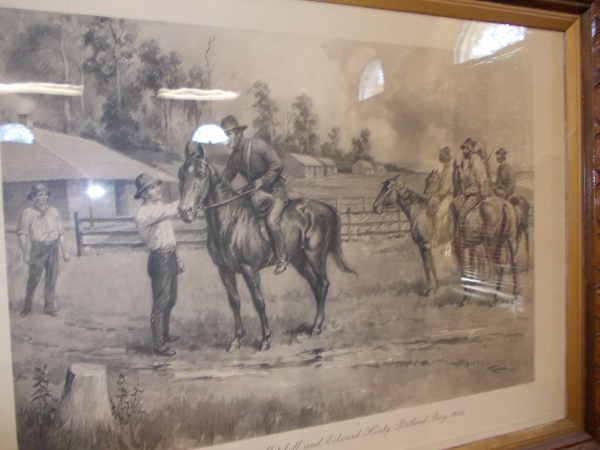 THE MEETING OF MAJOR MITCHELL AND THE HENTYS AT PORTLAND BAY 29 AUGUST 1836. PHOTO OF A PRINT AT PORTLAND’S HISTORY HOUSE

The party returned to the Surry River then continued back to the base camp. On 31 August, Mitchell’s party reached Mount Clay with Mitchell naming it, and by sunset they were back at the base camp.  We leave Major Mitchell now but will join him again on 11 September when he reaches what is now Hamilton.

The arrival of Major Mitchell at the doorstep of the Henty’s home at Portland Bay influenced their future.  In glowing terms, Mitchell had told them of the land around the Wannon Valley he described as “Australia Felix”.  On his recommendation, the brothers travelled north to see for themselves. Within twenty-five miles from their settlement at Portland Bay, they noticed the change in the countryside.  Stephen Henty’s reaction was simply, “This is paradise.”  By 3 August 1837,  Henty sheep were on the land at Merino Downs and soon Muntham Station, opening the next chapter in the history of the Henty brothers.

This video of Muntham Station shows the countryside Major Mitchell and the Henty brothers found so attractive.

Mitchell, T. L. (Thomas Livingstone) Three expeditions into the interior of eastern Australia, with descriptions of the recently explored region of Australia Felix, and of the present colony of New South Wales. London, T. & W. Boone

To really get a feel for a time in history, there is nothing better than a diary, letter, memoir or personal account.  Some of my favourite Western District history books are those from pioneer times, such as “The Diaries of Sarah Midgley and Richard Skilbeck” and James Bonwick’s educational tour of Western Victoria in 1857.  There is another on the list that I haven’t shared with you before, “After Many Day’s” being the reminisces of Cuthbert Fetherstonhaugh.  Even better, the book is available online. (See link at end of the post)

Cuthbert Fetherstonhaugh, born in Ireland in 1837, published his memoir in 1918 when he was 81, written, he claims, after much prodding from his wife, Flora, and friends particularly a friend from the later part of his life, writer Walter G. Henderson of Albury.   Many thanks must go to them because their persuading resulted in a 414 page rollicking yarn, packed with places, names and stories from the first half of Cuthbert’s life with illustrations.

This is not just a story of the Western District, but of life in Ireland and Germany during Cuthbert’s childhood.  There is also a wonderful description of his passage on a second-class ticket to Melbourne aboard the “Sussex” in 1853.  Cuthbert spent some time in Melbourne before he went to the Henty’s Muntham station (p.90) in the Western District, and his account brings 1850s Melbourne to life.

He outlines his friendship with Thomas Browne/Rolf Boldrewood author of “Robbery Under Arms “(p 40).  He includes the obituary of his father, Cuthbert Fetherstonhaugh, who spent time as a Police Magistrate at Hamilton (p.52).  During his time there, Cuthbert Snr, resided at  Correagh at Strathkeller, just north of Hamilton.  (Today, Correagh is in excellent condition and was featured in an issue of Home Life magazine, available online). Cuthbert Snr and his wife Susan and daughter Adelaide are buried at the Hamilton (Old) Cemetery (below). 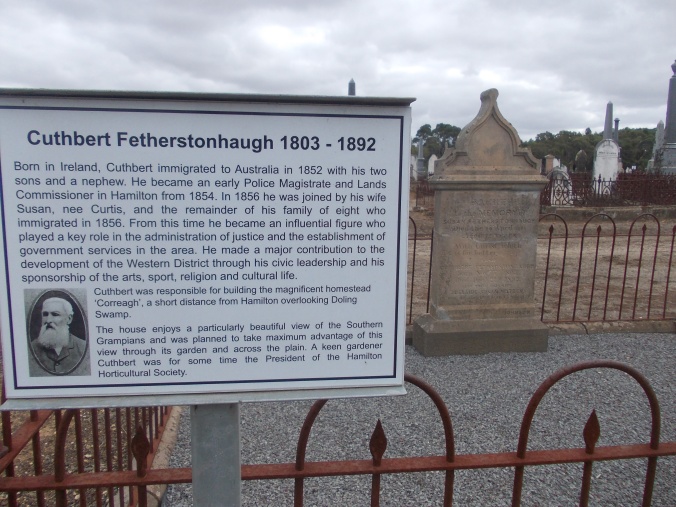 There are stories of horse breaking, bushrangers, colonial racing and more.

Some of the Western District identities he met included members of the Henty family, Samuel Pratt Cooke, Acheson Ffrench and the Learmonths.  But there were also stockmen, horse breakers and crack riders.

He associated with Adam Lindsay Gordon (p.165), a person he admired for his riding skill and poetry, and there are several extracts of ALG’s verse.

Cuthbert devoted several pages to George Waines (p177) and the trial, that saw Waines convicted and sentenced to hang for the murders of Casterton couple Robert and Mary Hunt.

After Muntham, Cuthbert travelled to Queensland via Sydney.  On the way, he dropped in at the Chirnside’s Mt William station at the foot of the Grampians.  It is was there he saw the “western mare” Alice Hawthorne, in the days when she was beginning her Cinderella story, transforming from station hack to champion racehorse.

After lengthy reminisces of his time in Queensland, past Rockhampton, Cuthbert then focused on his life in N.S.W where he spent two years as an Anglican minister.  He died in Wellington, N.S.W. in 1925, aged 88, remembered as a pastoral leader.

What the critics said:

At the time of the book’s release, the Sydney Stock and Station Journal described the book as “pure Australian”

When Cuthbert died in 1925,  Walter Henderson wrote of his friend and the book he persuaded Cuthbert to write.

Read “After Many Days: being the reminiscences of Cuthbert Fetherstonhaugh” online