Jonathan Harman and his older brother James were like two peas in a pod.  While Jonathan did not show the devotion to the Wesleyan Methodist Church as his lay preacher brother, they shared a keen interest in farming practices and community involvement.

Jonathan was born in Melbourn, Cambridgeshire in 1837.  By the 1851 England Census, he was the eldest child still living at the home of Joseph and Sarah Harman in Drury Lane, Melbourn.  His farming career had begun with his occupation, like so many others, agriculture labourer.

In 1854, Jonathan and his brothers George and Reuben boarded the Queen of England for Sydney.  The first record I find for Jonathan in Victoria is 1862 when he married Mary Oliver, daughter of fellow pioneers, Jonathan Oliver and Ann Richards.

In 1863, the first of the couple’s ten children, Arthur, was born at Yambuk, near Port Fairy.  Peter Fraser in Early Byaduk Settlers, mentions Mary’s father  Jonathan Oliver living there in 1863.   Peter Fraser also tells of James and Jonathan Harman each having a team of bullocks which they used for a carting business along the Port Fairy road, at least as far as Byaduk or even Hamilton.

Also from Early Byaduk Settlers, I have discovered Jonathan was one of the first buggy owners in Byaduk, purchasing a heavy red buggy in 1875.  Up until that time, most people owned spring carts which were not suitable for a trip into Hamilton.  Until the arrival of buggies, the only comfortable way to travel to Hamilton was horseback or dray.  That trip would have taken 4-5 hours according to Fraser.  Today, the trip to Byaduk from Hamilton is only about 15 minutes.

The family of Jonathan and Mary Harman were:

Jonathan and Mary lost one child, Joseph as a baby.  Sarah was only six at the time of her death and her son John was 18.  Daughter Mary Ann was born in 1869 but I have never found a record for her death or marriage.

Joseph, Sarah, and John are buried at the Byaduk cemetery and a headstone marks their grave, but where is Mary Ann?

Wife Mary died in 1884 at Byaduk at only 41 years of age.  Her youngest child Jonathan was only eight years old at the time.

At the time of Jonathan’s death on 2 April 1930, he was living with his daughter Amelia Bell at Heywood.  He was 94 years old.

Jonathan was buried with Mary next to their three children at the  Byaduk Cemetery. 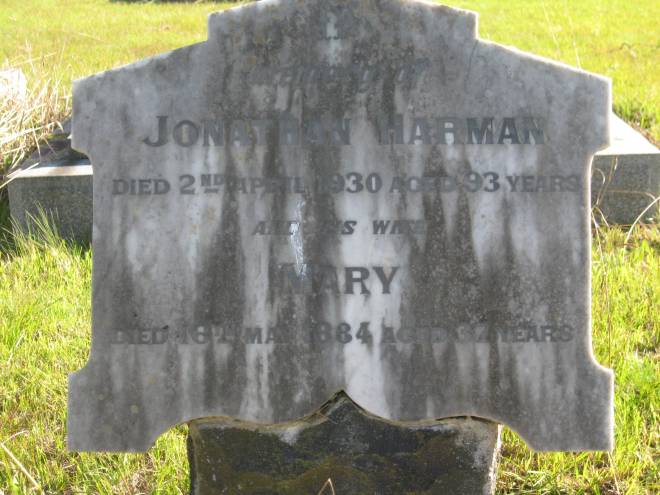