The intention for this week’s Trove Tuesday post was brevity.  But as often the way, as I investigated my chosen article further, I discovered a few twists and turns.

Mentioned last week, The Australasian has arrived at Trove and I’ve been searching for photos relevant to the Western District.  That is how I discovered Aaron Weller, the subject of a photo in The Australasian in 1897. 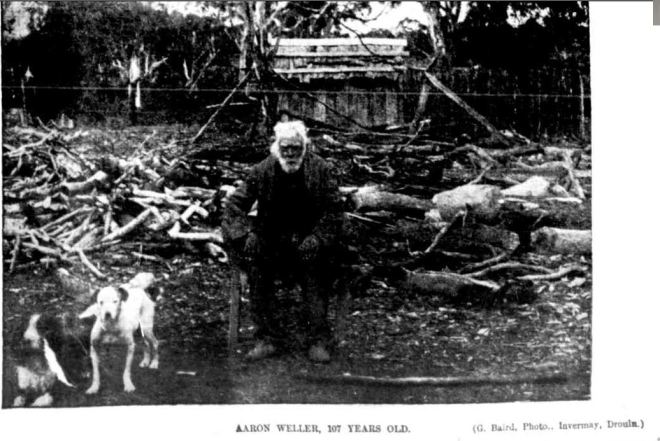 On 24 July 1897, The Australasian published an article and photograph of Aaron Weller, headlined “The Oldest Man in Victoria”.  A Mr George Baird had come across Aaron, living in the Balmoral area, listened to his story and took a photograph.  Aaron told George he was born in Wimbledon, England on 11 August 1790.  By the 1830s, he was in Tasmania where he worked for the Circular Head Company.  Later in the ’30s, aboard the Henry he sailed to Port Phillip, obtaining work as a shepherd with Phillip Rose at his pastoral run Rosebrook, near Horsham.  Mr Rose must have felt something for Aaron as, on a trip back to England, Phillip picked up Aaron’s birth certificate.  It was later destroyed in a fire at the Rosebrook homestead during Black Thursday, 1851.

After 1851, Aaron was working for Mr Robertson at his property Mount Mitchell near Lexton.  With the discovery of gold just south at Ballarat,  all the property’s labourers took off to try their luck, all except Aaron. He was content to stay on as a shepherd and besides, he was into his 60s.  He then headed across the Murray, continuing as a shepherd until he gained employment with Alex McIntosh at his property Glendinning near Balmoral where Aaron remained for 22 years.  After the death of Alex McIntosh,  Aaron moved to nearby Rocklands and even after he passed the age of 100, he was still chopping wood.

The digitised copy of the article is very faint but you can read it in full on the following link, http://nla.gov.au/nla.news-article139744803, but it concluded in this way:

And that’s the story of Aaron Weller.  Well at least I thought it was, but I wanted to know how far past 107 Aaron had lived.  The story turns sad as Aaron only lived a short time after 24 July 1897, the date of his article’s publication.   The Balmoral correspondent for the Hamilton Spectator reported that almost to the hour the 24 July edition of The Australasian landed in Balmoral, the townspeople were bidding farewell to Aaron at the local cemetery.  According to his wishes, he was buried close to Alex McIntosh, the man who employed him for over twenty years and whom he held in such high regard.

After his death, the Horsham Times remembered Aaron Weller through the reminisces of Rocklands owner, Mr Turnball.  Aaron had told him tales of the Duke of Wellington and Waterloo,  George III and William IV.  Maybe delirious in his last days, he claimed he was off to Melbourne to retrieve a sum of £40,000, the dividend of a £100 investment, money given to him by Angela Burdett-Coutts, a 19th English philanthropist and her husband the Marquis of Westminster.

The Australasian article, probably published without Aaron’s knowledge, was thought to have brought unwanted attention to him.  He had spent sixty years keeping to himself in Victoria, living a simple life with dogs as companions. But he’d been in the papers before when he turned 100 and again when he turned 106.  On that occasion, Mr Turnbull held a celebration in Aaron’s honour    How much Aaron knew about The Australian article, which in no way mentioned his liking for a drink or his pipe, and the resultant public reaction is unknown but reports after his death suggest he may have had some knowledge.  The Australian responded to his passing, 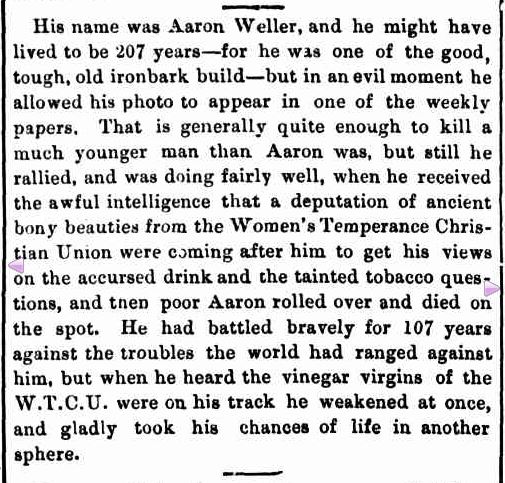 If the article about Aaron had not been published, would he have lived for another year or two?  Or was his time up anyway?  Looking back at the concluding paragraph of the original article, Aaron was tiring.  Maybe, if the W.C.T.U. did write a letter to Aaron’s guardians, presumably the Turnballs. maybe they too could sense his weariness through his photo and words.

Aaron’s story was interesting.  Interesting enough to see what else could be found.  A search of Australian records at Ancestry.com.au revealed within the New South Wales and Tasmania Australia Convict Muster records (1806-1849),…Aaron Weller, assigned to Mr John Sinclair, 1833.  On to the English records and there was Aaron Weller in the Australian Convict Transport Register 1791-1868, convicted at Kent and sentenced to transportation for seven years.  His crime, listed in the England & Wales Criminal Registers, 1791-1892, was fraud.  Next, across to Tasmania’s Heritage website and the convict index and there again was Aaron Weller,  transported aboard the Gilmour from London on 27 November 1831, arriving at Tasmania on 22 March 1832.

After all of that, I couldn’t find the age of the said convict, Aaron Weller.  If it was Aaron of Balmoral, he would have been forty-one at the time of his departure from England.  I did find one other Aaron Weller, and of Kent, in the UK Land Tax Redemption Records from 1798, eight years after Aaron’s birth.

Back to Trove, and I searched for Aaron Weller through the 1830s and, looking to confirm some of Aaron’s story, I searched for the Henry, the ship Aaron said he sailed aboard to Victoria.  Despite not having any ages to match up Aaron, the results of my two searches found something that may get me a little closer to confirming Aaron Weller of Balmoral came to Australia as a convict.  In May 1836, convict Aaron Weller, only three years into his seven-year term, was granted a ticket of leave.  Coincidentally, on 15 July 1836, the Henry, Balmoral Aaron’s ship, sailed from Launceston to Port Phillip.