Gertrude Grewar was born in 1881 to John Grewar and Elizabeth Francis Kilpatrick at Swanwater, northwest of St Arnaud.  After finishing school, Gertrude trained as a nurse, spending three years at the Gippsland Hospital in Sale.

She then worked for a year at a private hospital gaining experience in general, gynecology and midwifery nursing.  She also spent time as a surgical sister in charge of wards and operating theatres before being appointed Matron of the Gippsland Hospital for two years.

In May 1915, Gertrude advised the Hamilton Hospital committee she had enlisted and would be going overseas in two weeks.  She was thirty-three. She left Hamilton by the evening train on 7 May 1915 and departed Australia from Port Melbourne on 18 May aboard the RMS Mooltan.

She went first to Egypt, spending time at the No. 1 Auxilary Hospital of the 1st Australian General Hospital (1AGH) 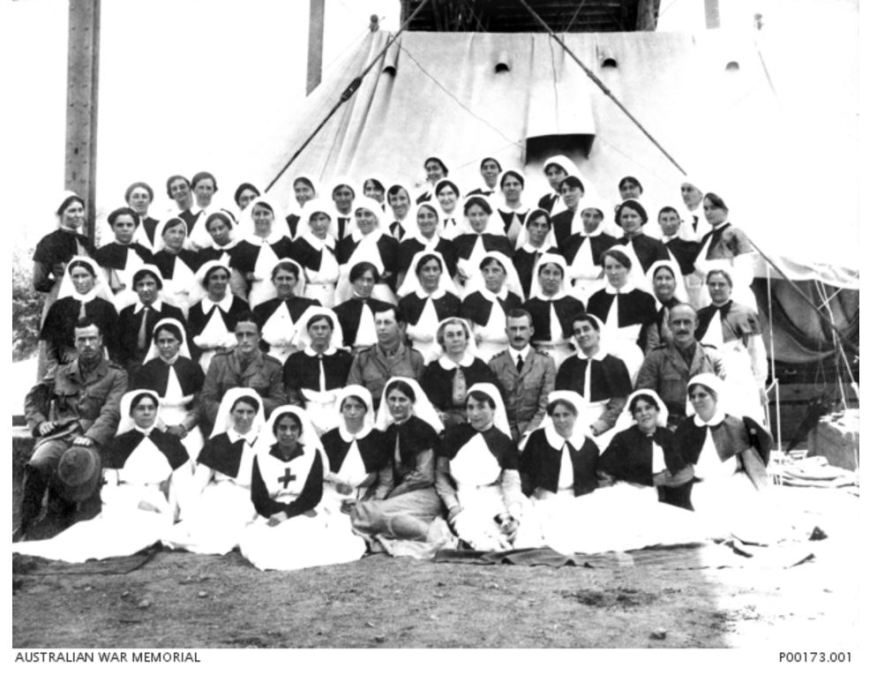 Gertrude remained in Egypt until December 1915, when she was among a group of doctors and nurses sent to London for a short rest and then on to positions in hospitals in England.  Gertrude, however, was assigned to a hospital ship.  On 19 January 1916, she sailed back to Australia on the Star of Victoria, accompanying wounded soldiers repatriated home. She then returned to the No 1 AGH at Harefield, England.

PART OF THE NO 1 GENERAL HOSPITAL AT HAREFIELD, ENGLAND. Image courtesy of the Australian War Memorial https://www.awm.gov.au/collection/C252909

On 1 September 1917, Gertrude was promoted to Sister and then detached to the Croydon War Hospital. She remained there until June 1918 when she returned to the 1AGH at Harefield to then go to France on 21 June.   By 23 September 1918, she was at the 1 AGH at Rouen, France.

On 28 October, Gertrude was sick in hospital with influenza.  She remained in France until late December 1918 when she reported for duty at Sutton Veny. She was ordered to report to AIF Headquarters in London on 12 January 1919 and left for Australia six days later.

On 24 April 1919, back in Australia, Gertrude underwent a medical.  It was found she had recovered from influenza but had an irregular heartbeat and pulse.  Therefore, she was unfit for duty and was discharged.  The examining doctor thought her condition was not permanent and she would fully recover in six months.

Gertrude then went to Castlemaine as matron of Dr. Kidd’s private hospital.  In early 1921, she went for a trip to Sydney and on her return fell ill at her mother’s house at Cope Cope near Swanwater.  Such was Gertrude’s condition, her friend Matron Dora Ellis from the Castlemaine Hospital was called for.  Dora had served with Gertrude with the No 1 General Hospital and they were together on the Star of Victoria.  Sadly Gertrude died at the age of forty on Empire Day 1921.  She was buried at Swanwater West Cemetery.  Along with a military headstone, a plaque was donated by the Traynors Lagoon Red Cross Society.