Basil Learmonth was born on 14 January 1893 at Hamilton, a son of Harold Learmonth and Elizabeth Law Gooderidge.  The Learmonths lived at Wintho in Hamilton and Basil attended Hamilton College. He had a period of illness as a child when he contracted typhoid in 1905. The following year his father became the Mayor of Hamilton, a role he held during 1906 and 1907, By 1908, the family were living in their newly constructed home The Gables in French Street, Hamilton (below).

Basil’s widowed grandmother Lucy Gooderidge was living with the family, however, she died at home in 1911. In 1913, the family company Peter Learmonth & Co. opened the Learmonth Motor and Engineering Company in Hamilton and Basil was manager.

Like many other young men in the town, Basil was a member of the local Mounted Cadets from 1911 to 1913 and spent six months with the Citizen Forces as a Lieutenant.  He was sportsman playing cricket and golf and a musician, playing violin and singing. Basil often performed at local concerts.

During April 1916, Basil enlisted and arrived in England on 24 July 1916 with Supply Column 3 of the Australian Service Corps.  He was promoted to Lance Corporal six weeks later.  On 25 November, Basil left for France but a month later he was in hospital for a few days with influenza.  Basil also had some disciplinary issues, beginning on the voyage to England, and while in France, he was absent from parade.  The later offence saw him demoted to Private.  Then on 14 April 1917, Basil was AWOL for twenty-four hours and he lost four days pay.

Soon after that offence, Basil left for the Australian Flying Corps (AFC) Flight School in England.  Trained as a wireless operator and observer, Basil graduated on 23 June 1917.  Attached to the 69th Squadron, he then went to the School of Aerial Gunnery.  On 24 August 1917, Basil left again for France and on 23 September was promoted to Lieutenant.  By November 1917, he was at Bailleul, France and he is seen on the far right of the photo below taken at the Bailleul Airfield. 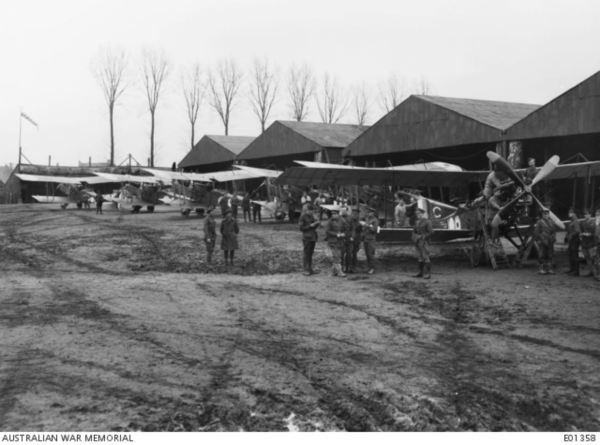 As an observer, Basil sat at the rear of the plane.  The observer was usually armed with a machine gun but one of the roles of the AFC was reconnaissance, taking photographs of the battlefields below and Basil flew most missions for that purpose.  The photo below shows a plane of the 69th Squadron preparing for takeoff with the observer in position. 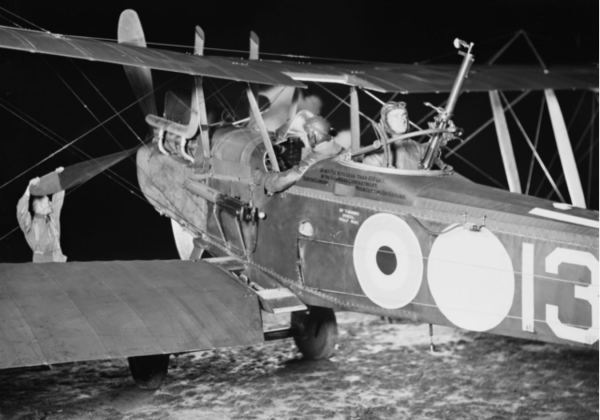 On 8 December 1917, Basil had leave in England for two weeks then “special” leave in Paris in February for around three weeks followed by further leave in Rome during March and April 1918 for three weeks.  On 14 April 1918, he wrote to his parents about his experiences in France.  He said there had been “stiff fighting” in the air.  He was wounded when his plane was shot and damaged and he “only struggled home”.  Basil said he was lucky because if the missile came inch closer it would have gone through his brain but instead it just grazed him.

On 18 May 1918, Basil was selected for pilot training in England. Once there, Basil was hospitalised in June 1918, requiring an operation on his nose and throat.  Meanwhile, on 24 August 1918, Basil’s mother planted a tree for him along Hamilton’s Clarke Street Memorial Avenue.  Basil got back to his training and obtained his pilot’s licence, graduating on 23 February 1919 at Leighterton, England. In March 1919, he married Emily Joyce Jackman in London.  After six months of married life in England, they boarded the SS Osterley on 28 September 1919.  Emily was not the only wife returning with new husbands with more than a dozen other wives on board, some with children.

In the 1920s Basil went into real estate, establishing B.Learmonth & Co in Melbourne.  But in 1928, Basil returned to aviation taking a refresher course at Point Cook airfield. He was then employed by May & Davis of Mount Gambier flying a passenger route between Adelaide and Mt Gambier in a Gypsy Moth plane.  He also offered flying lessons.  Basil arrived in Mt Gambier in late February 1929 and was the talk of the town.  He wasted no time in getting the plane airborne, flying over Mount Gambier with some people seeing a plane in flight for the first time. One of his first duties was an aerial coastal search for a missing man at Beachport, South Australia days after his arrival.  The Mount Gambier aerodrome was fully licensed in March 1929 and Basil had nine trainee pilots in his charge. Due to the novelty of aviation in the town, Basil often made the papers in the district. For example, in May 1929, Basil was seen doing aerobatics over Hamilton before flying over Heywood, Portland and the Warrnambool races, taking passengers along the way.

Also in May, Basil hosted four pilots and their planes from the Melbourne Aero Club, on tour to promote aviation. Basil joined them on a flight over Mount Gambier and pamphlets about aviation were dropped from the five planes.  Basil also gave lectures in the town about the merits of aviation including at a Rotary Club dinner.  He was in the news again in June 1929 when he flew from Robe to Mt Gambier in thirty-seven minutes, reaching speeds up to 170 kph. In July, he flew into Hamilton to inspect the proposed site for an aerodrome in the town and assess its suitability for May & Davis’ mail run.

In October 1929, Basil made news around Australia for the wrong reasons when involved in the worst plane disaster in South Australia’s short aviation history.  He’d been filling in at the Adelaide Commercial Aviation Co. in Adelaide from mid-September 1929. Around two weeks later, on 9 October 1929,  Basil took off from the Ardrossan airfield on the Yorke Peninsula with a passenger on board. They were returning to the Parafield Airport in Adelaide where Basil’s wife Emily was waiting to drive him home.  As they reached altitude, the plane rolled, then got into a downward spin.  It nose-dived 800 feet to the ground killing the passenger and severely injuring Basil.  The crash was witnessed by hundreds of people in town for an event who had gathered to watch the take-off. Basil was rushed to the Ardrossan Hospital with a fractured thigh and chest injuries.  Meanwhile, when news reached Parafield,  Emily was taken by plane to Ardrossan to be with Basil.

Basil recovered from his injuries and by December 1929 was in Western Australia and just seven months later on 19 July 1930, he boarded a ship in Sydney for San Francisco. He went on to spend three years with Western Airlines in Los Angles flying passenger routes.  While he was away, Basil’s wife Emily divorced him.  He returned to Australia in 1933 and began spending a lot of time with his brother Lionel on Lionel’s new boat sailing deep sea fishing off Victoria’s south coast.  Anzac Day 1934 arrived and Basil chose to attend the march instead of joining his brother and friends on another fishing expedition.  The boat got into trouble in Bass Straight and wrecked on to a King Island beach. The bodies of Lionel and his three passengers were never recovered.

In February 1937, Basil bought the Terminus Hotel in Wodonga and a month later he married Dorothy Alyson Davidson at the Wesley Church in Melbourne. They went on to have one daughter. Basil bought another hotel in 1939, taking ownership of the Border Hotel at Bacchus Marsh (below). 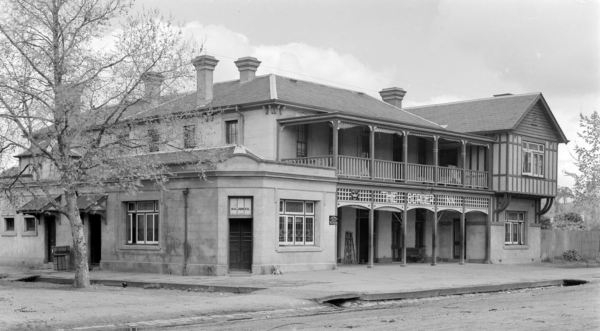 Basil died at Albury on New Year’s Day 1948 at the age of fifty-six.  Dorothy died as a result of an accident in 1951 aged thirty-eight.