A further ten pioneers join the Pioneer Obituary Index this month.  They include a woman who was a pioneer in the transport industry from Cobden through to Port Campbell and a man who travelled the same routes carting goods.  There is also a Coleraine storekeeper, a Colac politician and a man still training racehorses into his eighties.  Remember to click on the underlined text to read further information on a subject.

ROBERTSON, William – Died 24 June 1892 at Colac.  William Robertson was the second son of William Robertson of Colac Estate. He was born in 1839 at Hobart and by 1842, the Robertsons arrived in Victoria.  William returned to Hobart for his high school education before studying law at Oxford University. In 1861, he was a member of the winning crew of the annual Oxford vs Cambridge boat race and throughout his life, kept the trophy from the event, a cut-down oar. William returned to Victoria in 1863, marrying Martha Mary Murphy. He worked as a barrister in Melbourne until 1871 when he was successful in winning the seat of Polworth and South Grenville which he held until the next election in 1873 when he didn’t seek reelection.  William’s father died the following year and Colac Estate was divided in four for each of William Robertson Sr’s sons.  William Jr became the owner of The Hill (below).

William returned to politics in 1881, holding the seat of Polworth and South Grenville for the next five years, then in Victoria’s Legislative Council in the seat of South-West Province until 1888.   The Robertsons were known Australia wide as breeders of fine Shorthorn cattle and their stock sold for large sums.  Williams’ funeral on 28 June 1892  was one of the biggest seen in the district.  Various noted men from Colac attended as well as those from the world of politics.  Numerous wreaths were sent including one from the Governor. The Colac Brass Band led the cortege to the cemetery and shops closed.  Martha died at Armadale in 1909.

WIGGINS, Charles Augustus – Died 23 June 1901 at Hamilton.  Charles Wiggins was born in Tasmania in 1836 and arrived in Portland with his parents when a boy, attending school at Portland.  In his early twenties, Charles went to Hamilton to live with his brother James Wiggins. Charles was appointed the secretary of the Hamilton Common and was a sheriff’s officer and bailiff until 1883.  In the same year, he married Emma Lawn. Charles joined the Grange Lodge of Freemasons and was a member of the Australian Natives Association.  He was also secretary of the Hamilton Hospital and the Hamilton Pastoral & Agriculture Society.  Charles and Emma lived in Clarke Street, Hamilton and attended the Christ Church Cathedral (below). He was the secretary for the church for more than twenty years and a year before his death he was appointed churchwarden. 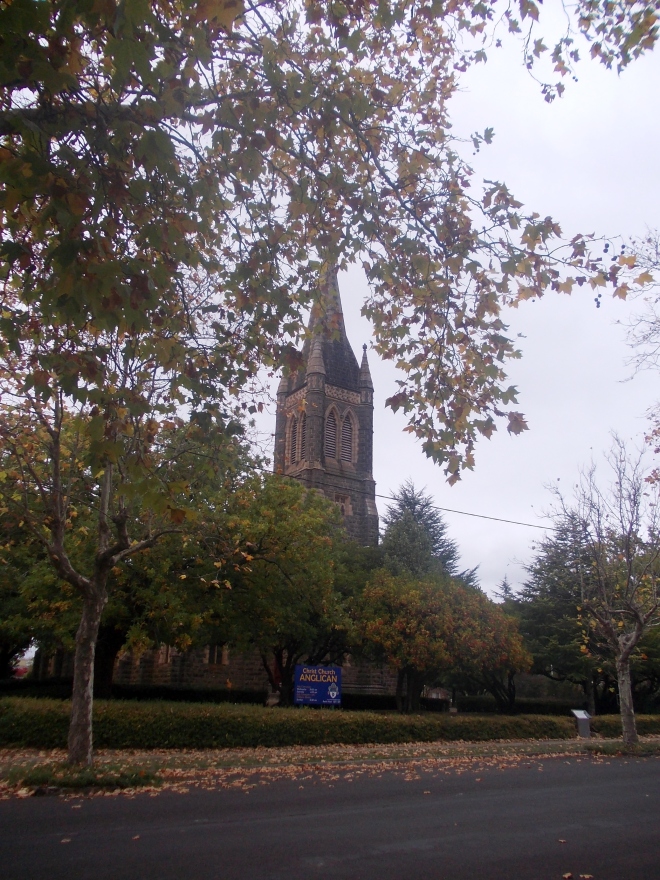 Charles’ death came suddenly, and he was preparing to be the returning officer at the North Hamilton State School ballot box for the upcoming election on 25 June and had received all the relevant paperwork in preparation.

SMITH, Sidney – Died June 1916 at Warrnambool.  Sidney Smith was born in Cambridgeshire, England in 1848. Arriving in Victoria as a child, he attended Geelong Grammar School.  Sidney started his working life at fifteen at the offices of R.Busche, Solicitors of Timor Street, Warrnambool.  He then worked as an accountant for a mercantile and shipping firm at Port Fairy, Messrs Bateman & Co.  Later he went into partnership with Messrs Bateman with the firm becoming Bateman, Smith & Co.  Operations moved to Warrnambool and Sidney’s brother Spencer went into partnership with him.  They operated the company until 1898. Sidney then worked as an insurance agent until his retirement due to ill health.  Outside of business, Sidney was a vestryman at the Warrnambool Christ Church. (below)

CLARKE, Edward Henry – Died 21 June 1918 at Digby.  Edward Clarke was born in Tipperary, Ireland in 1847 and arrived at Portland with his parents on the Helen to Portland in 1852.  The family first went to the Mount Gambier district before settling around Digby.  In 1873, Edward settled on his own property Lovely Banks at Digby.  Edward enjoyed football and cricket and was always a spectator at local games.  During the war, he donated to the various patriotic and relief appeals.  Edward’s wife Elizabeth Taylor died in 1909. Eight of Edward and Elizabeth’s ten children were still living at the time of Edward’s death. His youngest son John Clarke was serving overseas and returned to Australia in 1919.

LESSER, Louis – Died 19 June 1921 at Coleraine.  Louis Lesser was born around 1832 in Swarzędz, Poland, then under Prussian rule. When Louis Lesser arrived in Australia about the 1850s, his first job at Sandridge (Port Melbourne) moving sand from the nearby sand dunes.  He then went to the diggings at Bendigo and Pleasant Creek (Stawell).  Louis’ brother Abraham arrived in Australia and the two moved to Coleraine, opening a store in Whyte Street. The partnership in the store was mutually dissolved in May 1865 when Louis left for London and in 1867, Louis married his sister-in-law’s sister Londoner Evelyn May and they left for Australia.  They arrived in Melbourne and made their way to Coleraine to join Abraham and his wife Elizabeth, Evelyn’s sister.  The partnership in the Coleraine store appears to have resumed with Louis operating the store with other family members after Abraham’s death in 1886. 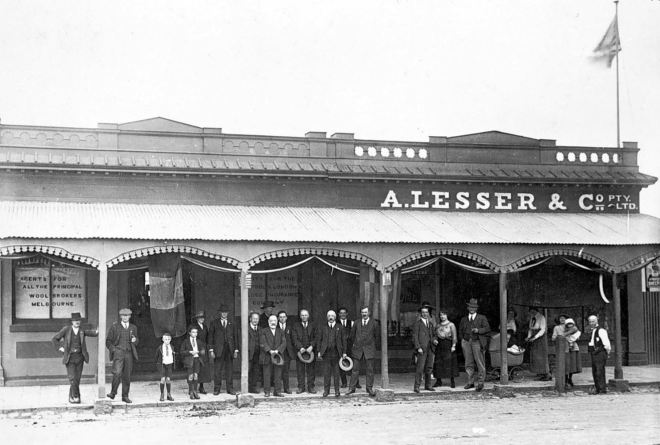 Louis was a member of the Coleraine Racing Club for sixty years, retiring in 1918 as an honourary life member. He also served on the Wannon Shire Council and was a Justice of the Peace.  He was also a generous man, donating to many causes and was one of Hamilton Hospital’s leading donors.  In his will,  Louis’ requested a fund be established after his death called the “Louis Lesser Charity Endowment Fund” with an annual sum going to various organisations annually. 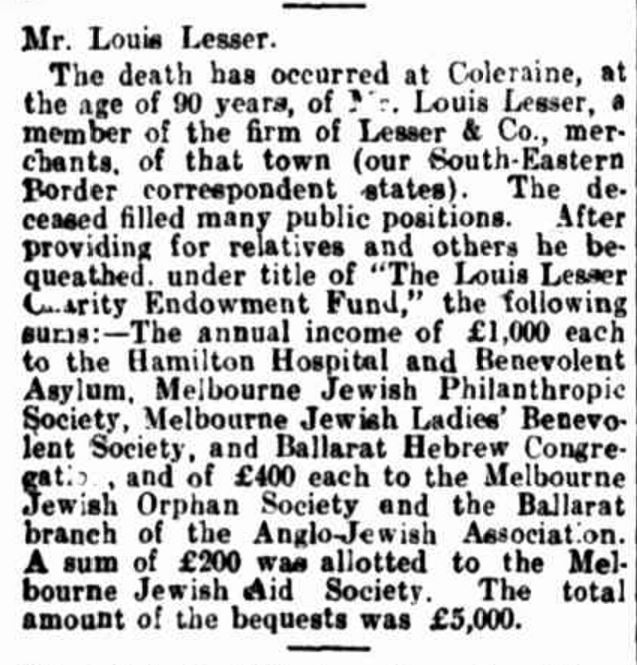 HARVEY, Martin – Died June 1929 at Cudgee.  Martin Harvey was born at Penzance, Cornwall in 1836.  Around 1851, the Harvey family arrived at Geelong where Martin held his first jobs. Soon he was working a bullock team, taking food to outlying settlements, then returning to the Geelong port with a load of wool.  He spent time around the Minyip district moving from property to property working as a shearer.  He also took a bullock team on three trips from Ballarat to Dimboola.  He married Elizabeth Swan in 1867 and they spent time farming around Ballarat before moving to Cudgee near Warrnambool.  Martin finally settled down and lived there until his death at ninety-three. Martin and Elizabeth had seven sons and four daughters.

ROBERTSON, Marslie May – Died 15 June 1930 at Hamilton.  Marslie Robertson was born in Inverness-shire, Scotland in 1844 and was eight when she arrived in Melbourne with her parents. The Robertson family stayed in Melbourne only a few days before journeying to Portland, then on to Straun Station near Coleraine where May’s uncles had already settled.  In 1868, she married William Sudgen Price Lewis, the stepson of Richard Lewis, a former owner of Rifle Downs at Digby. William leased Hilgay near Coleraine until around 1871.  They then moved to Hamilton.  Marslie was an excellent horsewoman and showed horses including Gold Dust for Samuel Winter Cooke in September 1890 at the Hamilton Show in the Ladies’ Hack Class.

Marslie and William had eight children and some time after 1890, the Lewis’ took a young boy Arthur into their care, raising him as their son. They resided at Pine Lodge in Mill Road, Hamilton. In 1914, Arthur Lewis was one of the first Hamilton enlistments for WW1.  He died as a result of his wounds at sea on his way from Gallipoli to a hospital in Alexandria, Egypt on 13 August 1915. The shock of Arthur’s death was a great loss to William and he died In October 1915 at Hamilton.  Marslie was involved with the Hamilton Red Cross during the war and the Women’s Christian Temperance Union.  Each Sunday, she gave out flowers at the Hamilton Hospital.

COOKE, Eliza Jane – Died 29 June 1932 at Cobden.  Eliza Cooke arrived in Australia when she was eight and the family made their way to Ballarat. In 1866, she married Charles Morehouse They arrived in Cobden in 1880 and Charles died in 1881 aged forty.  A son was born in August of the same year.  Eliza ran a store in Cobden and from around 1882 was operating coach services departing from the store.  She pioneered coach services between Cobden, Princetown and Peterborough. 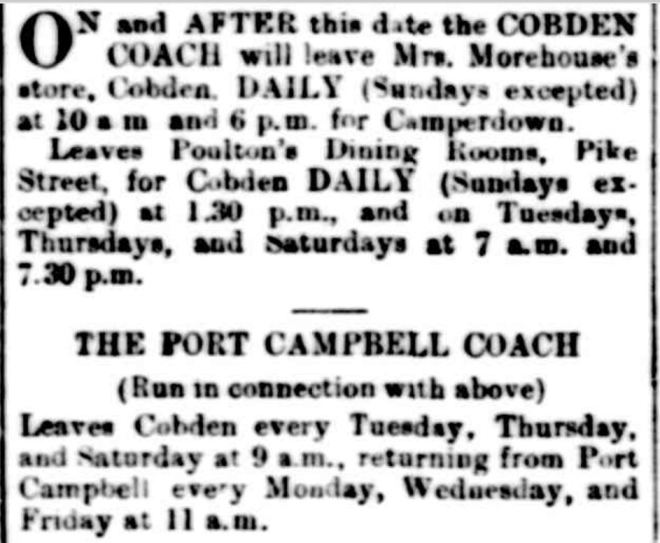 For forty-seven years, Eliza held the mail contract between Cobden and Camperdown. Eliza’s business grew and her sons eventually joined her. 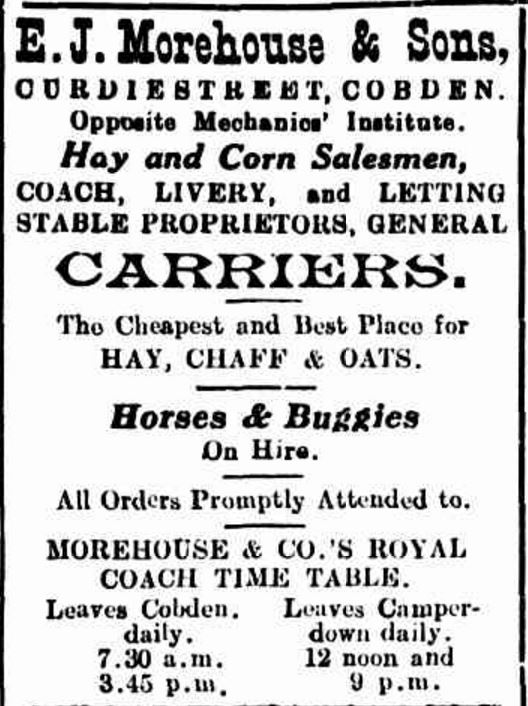 On 5 August 1931, Eliza celebrated her ninetieth birthday at her home Kooringa, Curdie Street Cobden.  At the time she was President of the Cobden Ladies’ Benevolent Society and still chairing meetings.

JEFFERS, Jonas – Died June 1933 at Cobden.  Jonas Jeffers was born at Connewarre around 1848.  Around the age of twelve, Jonas walked to Cobrico north-west of Cobden.  When he was older he bought land in the district and married Selina Westerland of Terang in 1869.  Jonas worked as a carter throughout the district, passing through the Heytesbury Forest when there was only the roughest of tracks.  He carted wool from Glenample near Princetown to Geelong and timber for the first bridge over the Sherbrooke River, east of Port Campbell.  He also carted wood for the first hotel in Cobden in the 1860s and items from the wreck of the Loch Ard to Colac in 1878.  At the time of Jonas’ death, Selina was still living along with ten of their children.

HANLON, James – Died 26 June 1940 at Casterton.  James Hanlon was born in Dublin, Ireland around 1854 and his family set sail for Australia soon after his birth. He lived in various towns including Narrawong and Hamilton and operated a hotel at Heywood. By the time he was twenty-one, it was thought he must have held the record for the number of successful racehorses he owned or leased. James was always interested in horses and twice travelled to India with horses exported to that country.  The first horses he raced were Paddy the Larrikan and My Lord. In 1878, James married Morgey Gooding Smith and they had four sons and two daughters.

In 1931, at the age of seventy-seven, Jim walked eighteen miles between Casterton and Coleraine scaling hills like a “mountain goat”.  He was in training for a veteran race over a mile at Mount Gambier on September 1931 in which James ran third riding Dutch Dull, beaten by a rider sixteen years his junior.  His training feats made the Weekly Times on 3 June 1939. A race meeting about three years earlier was referred to.  The jockey didn’t arrive for the ride, so James, then around eighty-four, put on the silks and rode the horse himself.  In the year before his death, James prepared a horse called Furnival. 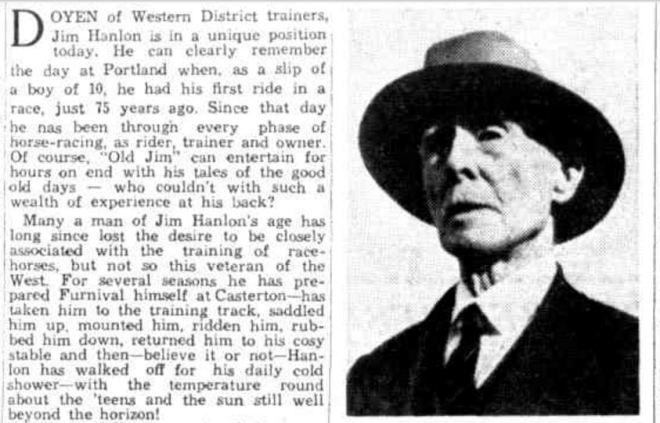 Aside from racing, James was a Mason for over fifty years including past Master of the Portland Lodge No. 6. James’ obituary in the Naracoorte Herald of 2 July 1940,  named fifty horses he was connected with during his life.