We left Major Mitchell on his return to camp north of Mount Eckersley after an excursion to Portland Bay. Mitchell’s next target was Mount Napier to the north-east.  The party headed in that direction on 2 September but the heavy going slowed the wagons.  They set up camp on 3 September and the following day, Mitchell set off with a smaller party for Mount Napier.  Swamps and later volcanic rocks, a feature of the countryside hampered the journey, but soon the mountain was before them.

Mitchell climbed to the summit and discovered the crater.  The idea of an extinct volcano was of great interest to him.  Looking around, he could see the Grampians and Mount William to the north.  Meanwhile, the sun was setting and before Mitchell knew, it was too late to return to camp.  He ascended and camped the night at the base of Mount Napier in unfavourable weather.  In the morning, fog hung over the mountain until 10:30 am and he returned to camp twenty-six miles away.

The party had to move on, so Mitchell headed them north toward Mount Napier. He thought the knowledge he gained on his earlier trip would see them bypass the swamps but soon swamps were again in their path, slowing the wagons.  Mitchell decided to set up camp about eight miles away from Mount Napier, possibly on the Lyne Creek or Camp Creek west of Byaduk North. 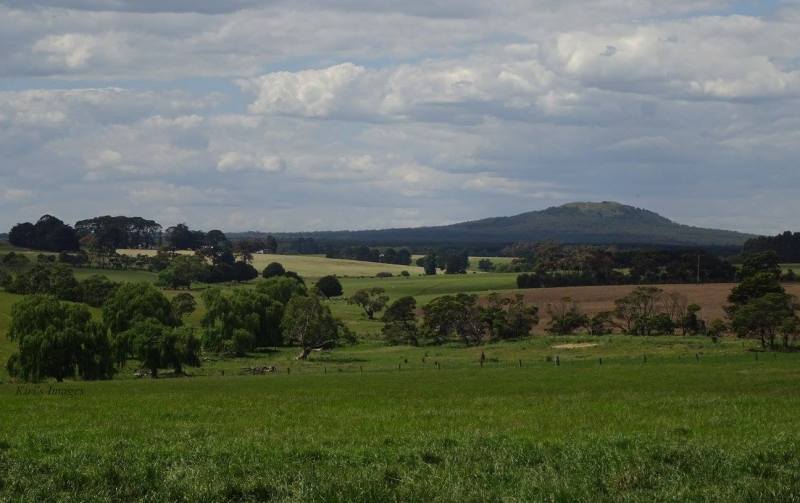 From the camp, Mitchell set off again for Mount Napier.  At the summit the view was hazy, but occasionally it cleared enabling  Mitchell to sight and name Lake Linlithgow and Mount Rouse to the north-east.  Mitchell and the party spent the following day around Mount Napier before packing up the base camp on September 11 and setting off in a northerly direction.  His journal entry for 11 September read,

About that time a yellow flower in the grass caught my eye and, remembering that we had seen none of these golden flowers since we left the beautiful valley of the Wannon, I ventured to hope that we were at length approaching the good country at the head of that stream. Such was my anxious wish when I perceived through the trees a glimpse of an open grassy country, and immediately entered a fine clear valley with a lively little stream flowing westward through it and which I named the Grange. This was indeed one of the heads of the Wannon and we had at length reached the good country.

So Mitchell thought he had crossed the Grange.  Most  likely it was Violet Creek.  They followed the creek north until it veered to the west and the party continued on to the north.  The following day, 12 September 1836, they came to what is likely to have been Muddy Creek. They then met a “smaller stream” we know today as the Grange Burn,

We proceeded next along a continuous ridge of fine firm ground covered with excellent grass, and soon after we saw before us a smaller stream flowing under a broad grassy vale and, having crossed it also without difficulty, we encamped in one of the valleys beyond, where this tributary appeared to originate. A finer country could scarcely be imagined: enormous trees of the mimosa or wattle of which the bark is so valuable grew almost everywhere; and several new varieties of Caladenia were found today. The blue, yellow, pink, and brown-coloured were all observed on these flowery plains.  (Three Expeditions into the Interior of Eastern Australia : with descriptions of the recently explored region of Australia Felix, and of the present colony of New South Wales by Major T. L. Mitchell, Volume 2, Chapter 3.9)

The point at which Mitchell crossed Hamilton’s Grange Burn is not entirely obvious but it is generally considered it was close to the Digby Road bridge where the Grange settlement would begin a few years later (below). 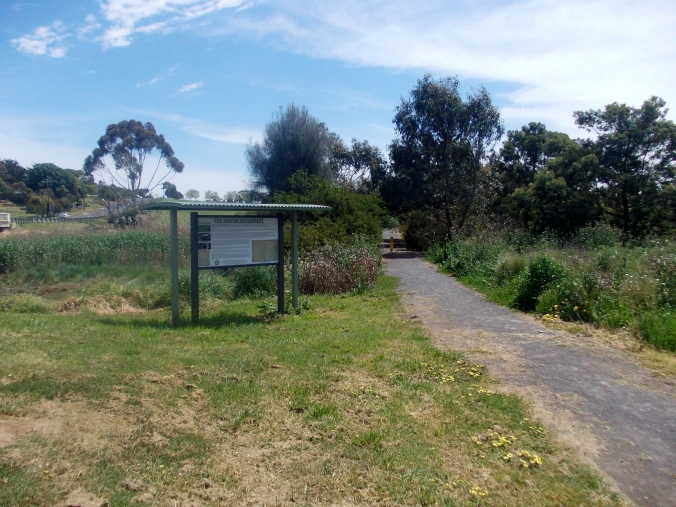 In 1884, the Hamilton Spectator published an article entitled “Early Settlement of Australia Felix” charting the path of Major Mitchell.  Along with Mitchell’s description, landmarks from the 1880s were included. 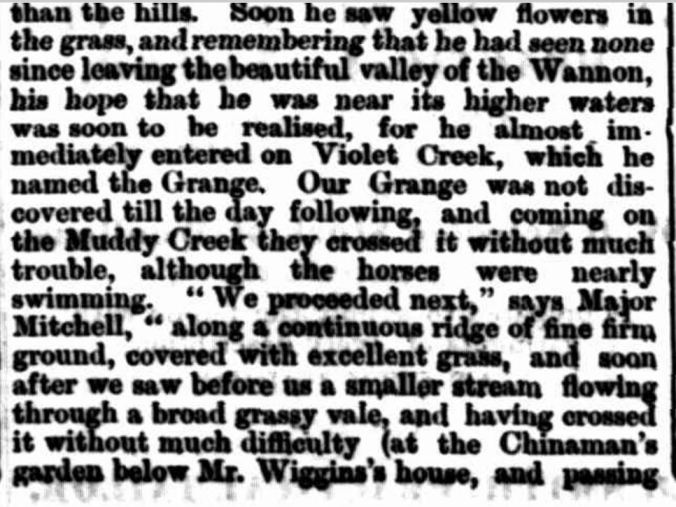 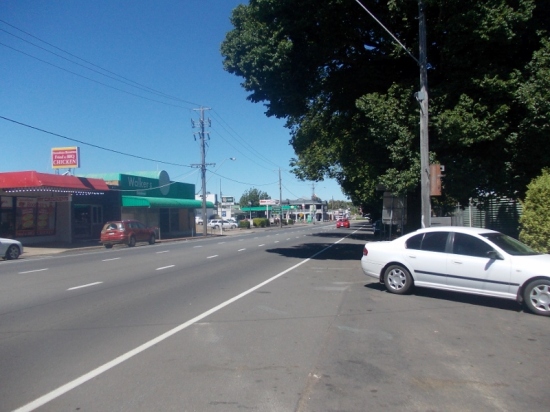 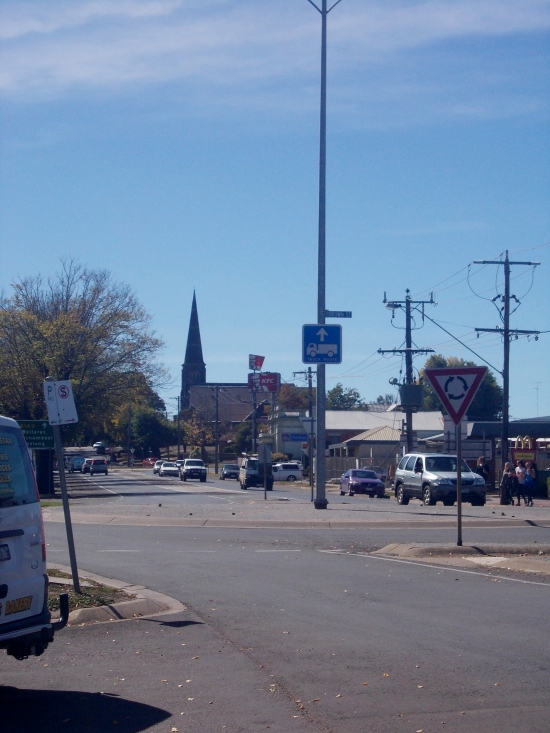 Don Garden in his book “Hamilton, A Western District History” also suggests Collins Street as a possible route. With Mitchell’s limited description, there is nothing to say they didn’t follow the course of the Grange Burn because, by the end of 12 September, they had set up camp on the Grange near Strathkellar, east of Hamilton.

Along the way, Mitchell saw and named Mount Bainbrigge (now commonly known as Mount Baimbridge), to the north and Mount Pierrepoint to the south.  On September 13, the expedition moved off from the Strathkellar camp.  Mitchell’s journal entry for the day read,

We broke up our camp early this morning and on reaching the highest ground we discovered a large lake on our left: it was nearly circular, about half a mile in circumference and surrounded by high firm banks from which there was no visible outlet; I named it Lake Nivelle.

(Three Expeditions into the Interior of Eastern Australia : with descriptions of the recently explored region of Australia Felix, and of the present colony of New South Wales by Major T. L. Mitchell, Volume 2, Chapter 3.9)

Lake Nivelle is known today as Lake Doling Doling, on the Doling Road at Strathkellar.  From there Mitchell’s party headed toward the southern point of the Grampians.  We’ll meet up with Major Mitchell again on 18 September when it will be 180 years ago since he passed near Glenthompson.

News of the “good country” soon spread on Major Mitchell’s return to Sydney. Within two years, interested parties were on their way to see for themselves.  Charles, Richard, and Edward Wedge were the first to arrive in 1838 taking up the Grange run.

Early arrivals at The Grange as Hamilton was known, were James and Jane Blastock in 1843. James purchased the Grange Inn in 1844, very close to where Major Mitchell passed less than ten years earlier.  The map below shows the Grange Inn or Blastock’s Inn, near the crossing of the Grange on Digby Road. 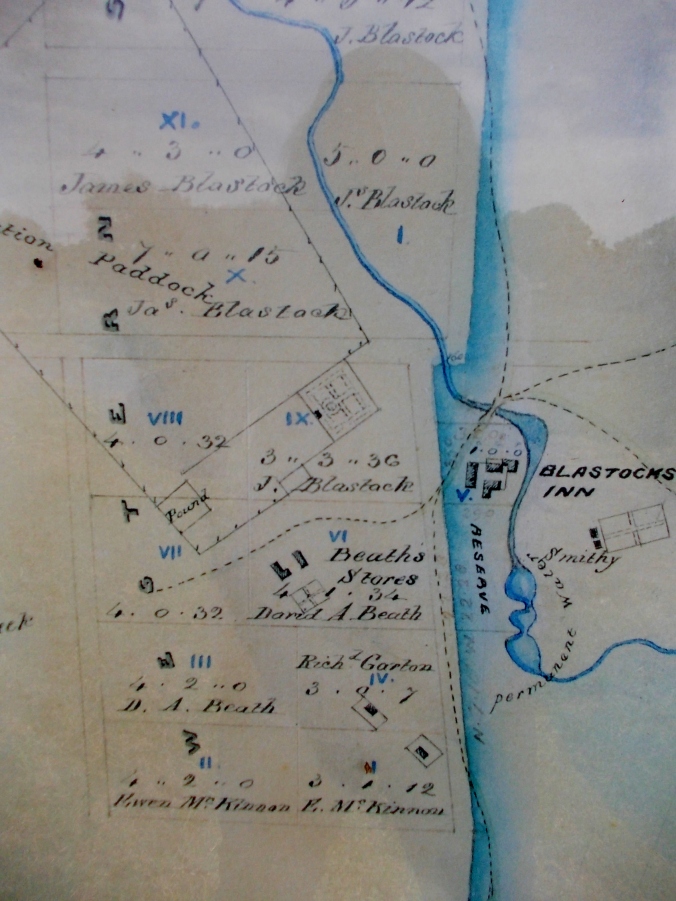 PHOTO OF MAP ON INTERPRETIVE BOARD AT THE SITE OF THE GRANGE SETTLEMENT, DIGBY ROAD HAMILTON.

James Blastock died in 1857 and his widow Jane married James Wiggins.  In 1893, journalist The Vagabond made a return visit to Hamilton, having previously visited in 1884.  For accurate information on the early settlement of Hamilton, locals suggested he visit Hamilton’s oldest resident Jane Wiggins at her home Sandal on the Grange Burn, not far from where she had lived with her late husband at the Grange Inn. 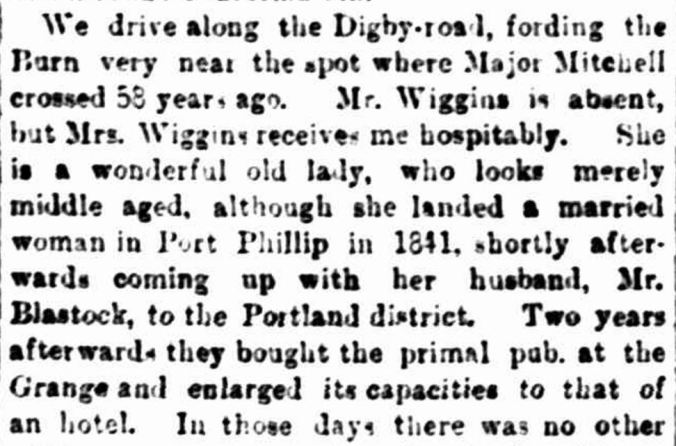 From her cottage’s verandah on the hill on Digby Road,  Jane Wiggins pointed out the track Major Mitchell travelled along and the site of the former Grange Inn. 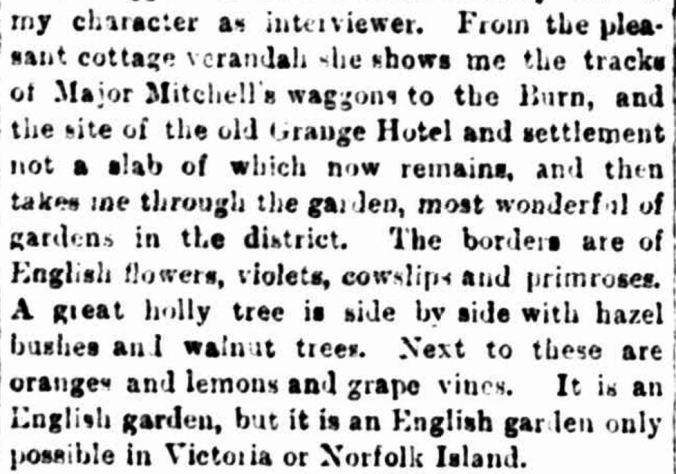 In 1937, Hamilton celebrated the 100th anniversary of Major Mitchell’s passing through the area with a week of activities including a “Back to Hamilton”. You may wonder why it was not held in 1936. The organising committee did consider September 1936, but thought since the first settlement was in 1838, early 1937 mid-way between the two events was a better option.  Early on in the planning stages, the committee had problems with funding and raising public interest.  That may have also contributed to the later date.  Despite the early problems, the celebration was a roaring success. A highlight was a lecture by historian Alfred S. Kenyon on the summit of Mount Napier where a memorial cairn was unveiled in 1915. 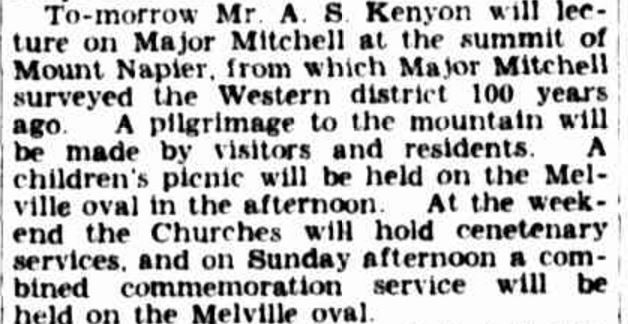 Another highlight was the unveiling of a Major Mitchell memorial cairn at Hamilton on 15 March 1937.  Just off Lonsdale Street, the acting premier Francis Old unveiled the cairn before several hundred people.  Also, Thomas Mitchell’s grandson presented the town with a photo of his explorer grandfather. 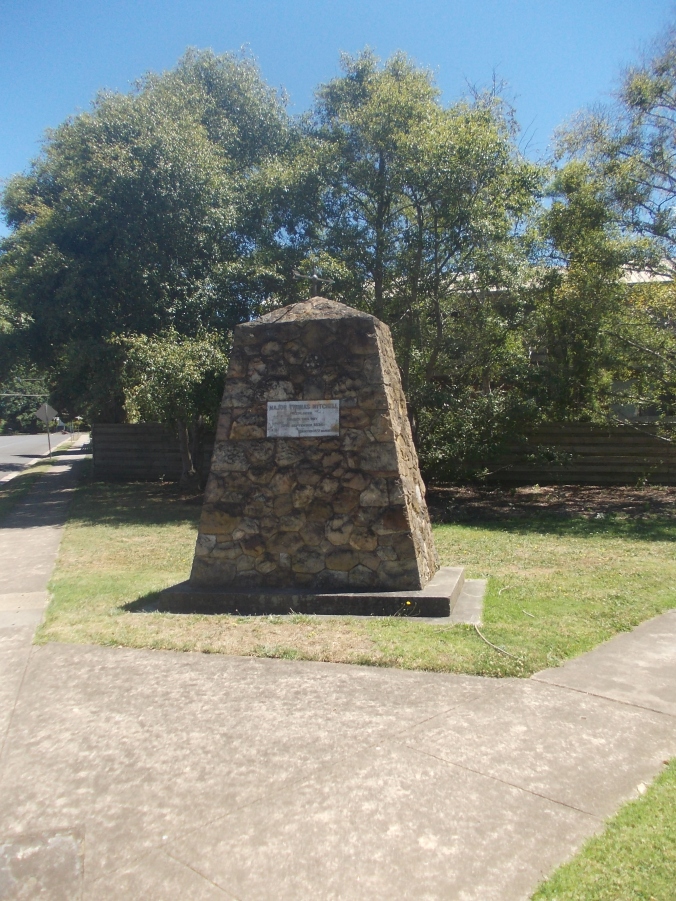 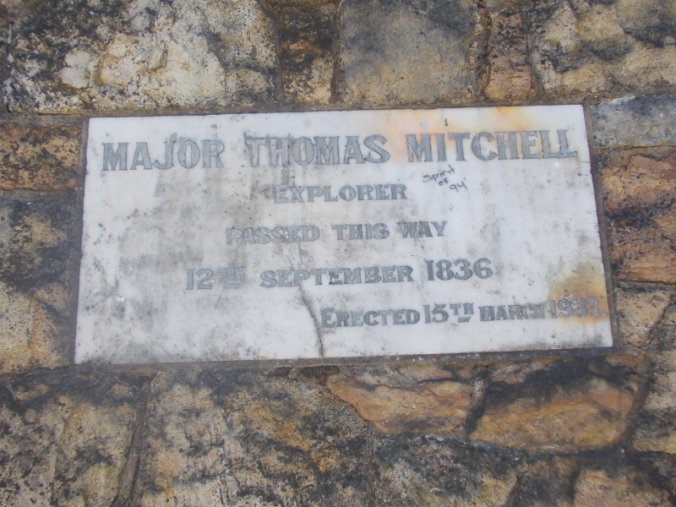 Mitchell, T. L. (Thomas Livingstone), 1792-1855 and University of California Libraries Three expeditions into the interior of eastern Australia; with descriptions of the recently explored region of Australia Felix, and of the present colony of New South Wales. T. & W. Boone, London, 1839.