Transport is important to us in one form or another. If nothing else it sure beats walking.   However, the subjects of this installment of Misadventures, Deaths and Near Misses should have stuck to Shank’s pony.

Click on the links to read each article in full.

Described as an “energetic” gentleman, Fred Heathcote, having just displayed his cricketing prowess on the field, gave a display of his riding prowess.  Unfortunately, his mount was  freshly broken and reared, falling onto Fred.  Despite an operation in excess of four hours, Fred was expected to make a full recovery

“Look what I’ve done, I’ve broken both my wrists” were the words uttered by Frank Millard upon seeking help after a horse accident.  Frank’s horse had taken him under a low branch.

In 1896,the horse of William Lucas shied at two dogs and somersaulted.  William received concussion, the horse was shaken.

A witness description of the accident involving John Beglin in 1894, suggested the horse “danced on the man while on the ground”  This sounds like it was rather a spectacular fall in which John sustained possible internal injuries.

Add a wooden attachment to horse, laden with people,  and accidents are bound to happen.  Take, for example, Patrick Power of Byaduk in 1889. The Port Fairy Cobb & Co coach was not far from Koroit when it broke an axle and tipped.  The coach driver fell on top of Patrick leaving him in need of medical attention

Not so lucky was  Oliver Filmer also of Byaduk. In early January 1900, Oliver and six others were returning from an outing to the Byaduk Caves when the horses bolted down a hill.  The buggy went over an embankment and capsized.  All the occupants were thrown out, including Oliver who sustained head injuries and later died.  Oliver was father-in-law to Absalom Harman, the son of Reuben.

In 1901, Mr H. J. Thompson was standing on the back board of a buggy as it went up a steep hill near Wickliffe.  The buggy wheel fell into a rut, Mr Thompson fell forward and hit the wheel with his leg.  Suffering lacerations and a dislocated knee, he was still able to catch the train home from the Wickliffe station.

Thursday April 20, 1876 was a day of accidents and  Mr & Mrs Webley  and their daughter, all of Byaduk, were caught up in the dramas.  While returning from Hamilton to Branxholme in the darkness, a pin holding the buggy shaft fell out and Mr Webley turned the horse across the road to stop it, but the horse went up an embankment, dropping Miss Webley out the back.  The horse then continued on down a cutting and Mr & Mrs Webley tumbled out.  Mr Webley received cuts, Mrs Webley, a broken arm and Miss Webley was not injured.

Similarly, on the same day, Alfred Bennett had a hair-raising experience when his horse, pulling a dog-cart, bolted.

Lucky Hector McDougall had “no dangerous consequences” after his accident when he tangled with a dray’s wheel. 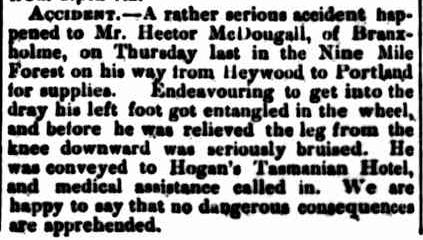 Mr Blackney, was left with cake on his face after an incident in Hamilton in 1942.  While his back was turned, his horse bolted, pulling a cart laden with cakes. 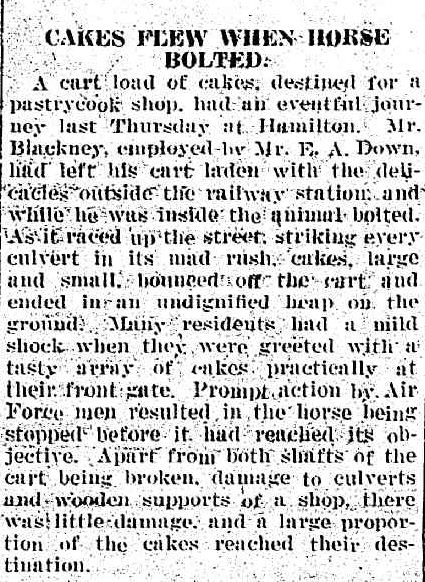 I’m sure a piece of cake helped residents recover from their “mild shock” at finding cakes at their front gates.

After a fun day at the Byaduk Coronation Celebrations in 1911, which included a fancy dress football match, the Smith Familyof Warrabkook met with disaster while travelling home. 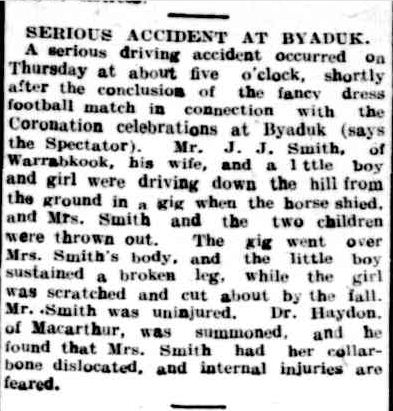 If horses and carts weren’t bad enough, throw cars and motorcycles into the mix, and disaster was almost ensured, especially if they all came together at once.  It also appears that with only a lucky few having a motor vehicle in the early days, it was not unusual to pile as many people into the car as possible.

Driving a Damlier home from a day’s shooting at Kirkstall in 1914, George Lock and his four passengers came to grief on the Port Fairy Road on the outskirts of Warrnambool.  It was 7.15pm and the road was dark and narrow.  George, having moved aside for an oncoming car, failed to see the unlit cart of a Chinese market gardener following behind the car.  His car hit the cart sending vegetables across the road.  Debris hit the car’s steering wheel sending the car out of control and into a fence and embankment, throwing the occupants from the car.  George Robinson received the most serious injuries, a ruptured liver.  The Chinese gentleman was lucky to avoid injury and was last seen chasing his horse, also very lucky, down the road.

T.S.A Laidlaw had a scary experience in his new Oldsmobile after leaving Byaduk bound for Macarthur.  The car got into the gravel, crossed the road, went over a prostrate telegraph pole, up an embankment and then overturned.  The car was extensively damaged, Mr Laidlaw wasn’t.

Robert Rymill, a 38-year-old grazier from Penola met a tragic end in a very early motoring accident.  In 1906, he was driving his 15hp Darracq from Melbourne home to Penola when he failed to take a sharp turn at the bottom of a hill, taken while travelling at 12mph.  The car’s wheels slipped and it overturned.  Robert’s passenger, his young gardener was thrown clear, but Robert was pinned underneath the car.  While initially conscious, Robert had passed away by the time help arrived.  This was despite the best attempts of his passenger.

If you are wondering what a Darracq looks like, this clip shows a much more powerful 1905 model travelling a lot faster than 12mph, but you get the idea.

Mr Dotzauer, in 1904, was riding his motorcycle between Terang and Noorat when a horse ran across his path. Mr Doutzauer broke his collar-bone, damage to the motorcycle and horse unknown.

Mrs Living got more than she bargained for when she hitched a ride in Mr E.J.Coopers sidecar one Friday night in 1932.

Len Austin’s accident was caused by a truck tyre, but no, it didn’t run over him.  While working as a road contractor, he noticed a bulge in the truck’s tyre.  The tyre suddenly blew and the expelled air caught him the eye.

Messrs. W Smith and Michael Hickey’s day took a turn for the worse in 1923 while driving a gig with a saddle horse tied to the shafts.  A car with five occupants approached and the saddle horse, obviously not used to the mechanical beasts, shied and found itself on top of the car.  The car rolled, but with plenty of help on hand, it was righted and the driver and his passengers continued on to Horsham.  The horse’s journey ended at the scene.

5 thoughts on “Misadventures, Deaths and Near Misses”